Home News To Veil or not to Veil 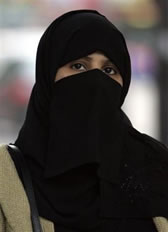 When jack straw made his now infamous comments about Muslim women and their veils he may not have been aware just how much of a debate he’d create. While some have argued in Mr Straws favour others have attacked it saying Muslims are once again being targeted for their religious choices. For Randa Asaad Buaras, an activist with organisation Assembly for the Protection of Hijab, Mr Straw’s comments have done more to harm community relations than bring them together. Speaking to The Asian Today, she reveals why there is genuine shock at just how much the veil is courting such controversy.
Do you believe the recent row over the wearing of veils has damaged the way Muslims are perceived in British society?
I don’t think that the recent rows have helped community relations in anyway. On the contrary they have been a catalyst for further attacks towards Muslims particularly so towards Muslim women who wear the Niqab and headscarf. To date there has been seven reported incidents which include verbal and physical abuse. However we believe that the majority of the British public are sensible and are not steered towards intolerance by such trivial comments by leading individuals.
Jack Straw said he wanted to open up a debate after his comments. Is there a worry that his comments will see increased negativity towards Muslim women wearing a veil?
Interfaith debate is always a positive tool for the elimination of misconceptions. What is of vital significance is the identification of the platforms from which such debates are aired, in identifying these platforms we can verify the motives behind the words. Mr Straw chose to voice his opinion to a local newspaper rather then have an open dialogue with Muslim leaders.
Such intolerant comments from a former Foreign Secretary are paving the way for further prejudice and legitimising Islamophobic far-right agenda’s. We only need to look at the seven subsequent attacks on the Muslim community in particular women who wear the Niqab or Hijab to see the true effects of Straw’s comments, which funnily enough is aimed at removing community barriers.

A number of those who have commented on the subject have said the issue has been blown out of proportion. What are your views on this?
I think the media has played a big role in blowing the issue out of proportion, one of the tabloid papers for example has released an article shortly after Mr Straw’s comments claiming that a male “suspected” terrorist who the police are looking for “might” be hiding behind the Niqab. The article was backed by a picture of a woman with the Niqab and has unsurprisingly made the front page. We should ask ourselves why a story like this with no facts but purely based on claims is published, and why now? The obvious answer is to ignite the situation further. Not to mention any story attacking
Muslims seem to sell very well these days.

As an organisation Protect-Hijab campaigns for the protection of Muslim women’s right to wear the Hijab. Since your formation have you been surprised at how much it has been attacked across the world?
Paradoxically, we are not so surprised by the behaviour of totalitarian Muslim countries such as Tunisia who have for decades suppressed the freedom of their people. But certainly the banning of the Hijab in European countries is startling particularly as many of their governments took the moral high ground of wanting to export democracy and liberty world-wide.
What type of events or protests have you been involved in with the organisation?
Protect-Hijab has organised and taken part in numerous events since its launch in 2004 in the House of Commons.
In July 2004 the group have organised a conference titled “HIJAB: a woman’s right to choose” which was hosted by the Mayor of London Ken Livingstone. The Conference was attended by more than 300 delegates, representing 102 organisations from 15 countries around the world.
The group have also launched the International Hijab Solidarity Day as a mark of solidarity for sisters who have been banned from wearing the Hijab. This event takes part on an annual basis every September. To date more then 20 countries around the world have taken part as a mark of solidarity. This includes conferences, awareness days and demonstrations to name but a few.
Protect-Hijab has also campaigned on a parliamentarian level, where a press Conference was held on Wednesday 23rd February 2005, at the European Parliament in Strasbourg. Hosted by Caroline Lucas MEP and Baroness Sarah Ludford MEP, the Press Conference was the first step in this campaign in support of the Written Declaration presented before the European Parliament on Monday 21st February 2004.
The Written Declaration received 70 signatories in total, falling short of the 370 prerequisite. Proposing the Written Declaration has allowed Protect Hijab to demonstrate to the political establishment in Europe how fundamental the issue of Hijab is to many women in Europe, and to present the argument for religious tolerance and freedom in the corridors of power. In the 3 months prior to the declaration lapse date, Protect Hijab has contacted every MEP in Europe and has mobilised Muslim women around Europe to lobby for change.
Are you fearful that Britain will go down the same route as countries like France and Turkey in banning the Hijab in certain circles?
Unfortunately the signs are ominous, the ban in countries like France were preceded by so called ‘discussions’ about community barriers and were eventually turned to banning policies and legislations. Britain’s Higher Education Minister Bill Rammell welcomed the banning of the Niqab in one of London’s most prestigious Universities, Imperial College although he reiterated this was his personal view and had no implication on any policies; it is very worrying to have a man of his stature voicing such negative views. But we will remain hopeful that Britain will keep its tolerant multicultural reputation and resist any calls for it to imitate any of its hard-line secular European neighbours.
Why do you think the issues surrounding the Hijab have come to the fore now?
There is now an undoubted climate of fear based on a rise in terrorism, but unfortunately for the masses, politicians have demonstrated a tendency to ignore hard-hitting questions on the drive behind terrorism and instead create and address superficial issues (i.e. a piece of cloth that covers the face of about only 5% of Muslim women in the UK). And true to form – Mr Straw, who is expected to contest Labour’s deputy leadership post next year, knowingly took the misleading and notably easier path of politicising an innocuous subject of private choice for personal gain.
For further information on Protect-Hijab projects visit www.prohijab.net
Related Articles:
PM backs Straw on veil debate
Galloway urges Straw to resign