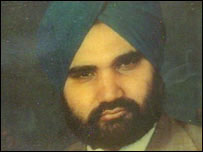 EIGHT people have appeared in court in India charged with the brutal murder of a Leicester businessman in the Punjab last August.
59-year-old father of two Mohan Singh Biring, was in the Punjab on business in August 2005 when he was beaten to death with iron bars outside a restaurant.
The trial, which has been delayed by a number of months, has begun at the Jalandhar District Court and is expected to last several months.
Mr Biring’s family believed his death was a contract killing and linked to a business deal he was involved in.
They expressed anger months after the killing after Indian police admitted they had not arrested anyone as part of the investigation.
They were supported in their quest for justice by Leicester MP Keith Vaz who presented a 10,000-signature petition to Parliament calling for action in the case.
Mr Singh’s brother, Tirath Biring, who is a councillor in Oadby and Wigston, flew out to meet the police and government officials along with Mr Vaz early in 2006 to urge the police to step up their investigation.