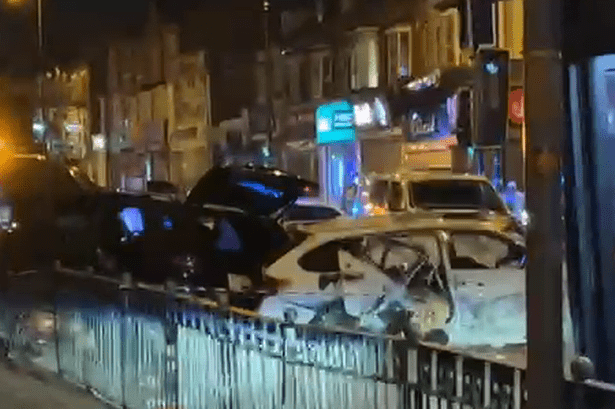 A collision involving three cars and a bus were involved in a major crash on a main city route.

Emergency services were called to the incident in Stratford Road, Sparkbrook after 10pm on Friday 12 August and was described as “sheer carnage”

The road was cordoned off and drivers were diverted away from the scene as it was cleared. It is believed no-one was seriously injured in the smash.

West Midlands Police confirmed it was called to reports of a collision at 10.10pm, but added it is understood no one was seriously injured. Witness, Asif Butt, told BirminghamLive: “l went out eat last night, after my meal whilst strolling I heard a loud bang.

“As I turned around I saw sheer carnage. Three cars and a bus were involved it was indescribable.

“There were people running towards the white car to see if everything was ok. It seemed like the passengers in the white car were hurt badly.

A spokesman for West Midlands Police said: “We received reports of a collision involving up to four cars on Stratford Road at just before 10.15pm on Friday (12 August). No-one was seriously injured.

“It’s alleged there was some disorder following the collision and anyone with information is asked to contact us via Live Chat on our website and quote 4029 of 12/8/22.”