A group of men stitched together parts from stolen cars with written-off motors before selling them to unsuspecting buyers.

The ‘Frankenstein’ motors would go back on the roads without any mechanical or safety checks.

A VW Golf, sold for just over £10,000, had been re-fitted with airbags taken from a stolen car, which police say test show would have failed to deploy in a collision.

West Midlands Police exposed the extent of the group’s criminal enterprise after a £70,000 Mercedes SL400 stolen from Aylesbury Road, Solihull on 1 May 2017 was traced to a garage in Digbeth’s Charles Henry Street.

The car was found with false plates and surrounded by a stash of car parts, body panels and number plates from 21 stolen cars.

Detectives discovered stolen parts were being sold by the men through two eBay accounts − BritishGermanCarSpares and car_parts_2010 − which had shipping addresses linked to Nadeem and Arshad.

Cops tracked a third chop shop in Grove Road, Sparkhill, after a BMW stolen from a garage forecourt in Derby.

A Proceeds of Crime hearing in April will decide how much money the gang needs to repay.

The gang was were jailed at Birmingham Crown Court on December 10,  Arshad, was jailed for seven years, Nadeem for six, Zameer, who had also admitted assault, to five-and-a-half and Hussain to four-and-a-half. 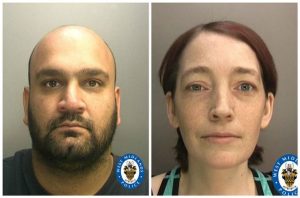 Detective Inspector Hannah Whitehouse, said: “This group was handling stolen cars on a huge scale… bigger than anything we’ve ever seen in the West Midlands.

“We believe hundreds of stolen vehicles have passed through their chop shops.

“It’s unclear who was stealing the cars for them but our belief is the gang was ordering stolen cars to match those they’d bought at salvage auctions.

“We know they bought around 300 salvage vehicles since 2015 from one major dealer alone − and we seized evidence showing they’d advertised 350 vehicles for sale on Gumtree and Autotrader with a combined value of £900,000.

“This group may not have been stealing cars but they were providing a very active market for car thieves and causing lots of pain and distress to motorists.”

West Midlands Police is pushing for improved regulation that will make it harder for criminals to buy salvage vehicles and put them back on the roads after being fixed with spares stripped from stolen cars.