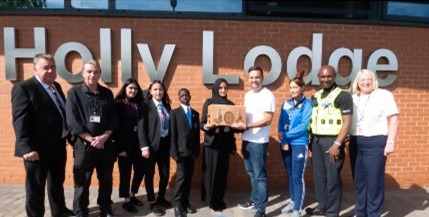 A secondary school student from Holly Lodge High School in Smethwick has taken it upon herself to design and install a knife box at her school to prevent youngsters from knife crime.

Jakia Khanom, a year 8 student came up with the idea after an interactive session hosted by Sandwell Police at her school inspired her.

Jakia, 13-years-old wrote a small poem and had it engraved into the box which aims to get students to anonymously hand in any knife they have been carrying for what they feel is protection. 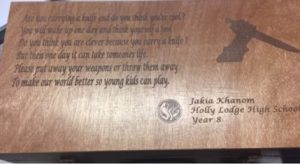 The youngster hopes it will help students and parents in the local area to get involved in doing their bit to put an end to the recent rise in youth violence.

Jakia said: “I got the idea from listening to the news and hearing stories of knife crime from the activities we have done in school recently.

“My school took part in a knife crime initiative with other Sandwell schools called World Café and we wrote poems on the issue from our perspective.

“I hope my idea helps to save someone’s life and it could even be someone I know.”

Police Offender Manager Sgt Dave Rogers has championed the work and said: “This is exactly the kind of original idea we are looking for when we speak to young people in our area.

“If this fantastic idea has a knock-on effect on other school students, then we have achieved our aim on educating and deterring the youth of our community from crime.”

The installation of the box is just the latest in the launch of a national week-long operation that aims to increase awareness on the dangers of carrying a knife and exactly what the police are doing to stop it happening.

The knife box will be used to seize any weapons which are given in and will be disposed of appropriately by local police officers.