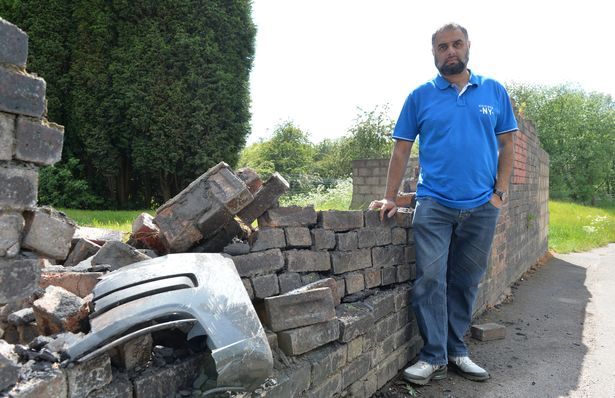 A taxi driver is appealing for help to catch the driver who crashed into the wall at the front of his house.

Ahmmar Mahmud, 40,  is appealing to witnesses after the incident, which took place in the early hours of Tuesday 28 May as the family were in bed at home.

The vehicle smashed into his property in Clay Hills, Tunstall and has left rubble across the ground.

The dad-of-four only discovered the damage when he got up at around 11am and immediately checked his CCTV which captured a dark grey hatchback ploughing into the wall at 5.30am.

One camera shows the driver losing control on the wet road surface before crashing out of sight.

Another angle shows the car crossing the pavement and shooting into the wall before getting wedged.

Three men wearing bright orange hi-vis jackets jump of the vehicle to assess the damage before driving off.

A female witness travelling behind in a silver Vauxhall Corsa can also be seen stopping, putting on her hazard lights and getting out of the vehicle.

Ahmmar is trying to catch the culprits and has said: “When I went outside my wall had been completely destroyed.

“I checked my CCTV it showed everything.

“The driver just left without leaving their details.

“They’ve even left part of their bumper at the scene so we know it’s a grey car but I’m not sure what type.

“I believe they were on their way to work as you can see the hi-vis jackets they were wearing.

“The woman who was following behind stopped.

“I’m hoping to get in touch with her.

“The CCTV also shows an Enterprise van driving past.

“I believe there were quite a few witnesses.

“I’m insured but that’s not the point.

“It’s more the hassle of sorting it out and my insurance premiums will also go up.

“I’ve reported it to the police but we need witnesses to come forward.

“The car already had damage to its back window because it was boarded up.

“And there must be quite a bit of extra damage now too.

“It will be quite distinctive.

“Someone must know who they are.”

A spokesman from Staffordshire Police said: “Officers were called to a report of a road traffic collision involving a vehicle and a wall on Clay Hills in Stoke-on-Trent at 2.12pm  on May 28.

“The caller stated that a car had driven into a wall and made off.

“Inquiries are on-going and any witnesses should get in touch.”

Anyone with information is asked to call Staffordshire Police on 101 quoting incident 220 of May 28.