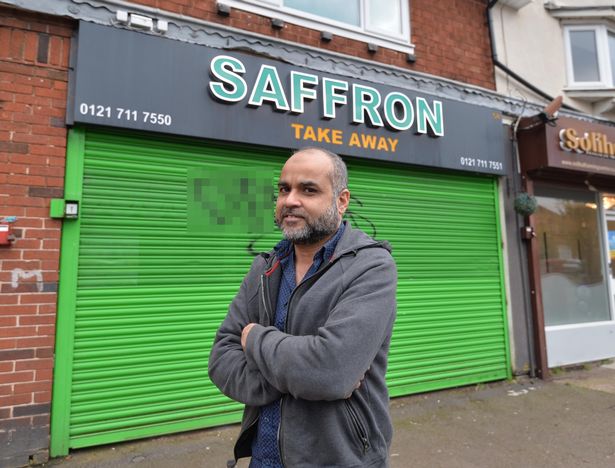 A popular Indian takeaway had  the word “P***” scrawled on its shutters in huge black graffiti, leaving the owner questioning: “Where am I living now?”

Mr Rahman opened Saffron Indian Takeaway in Damsen Lane back in 1995, setting up in Solihull 24 years ago.

“I can’t really express my feelings. This is something very unusual that has happened.

“In a long time we have been in Solihull, this kind of thing has never happened before.

“I’ve got lots of customers, friendly people living here and they use us regularly. Nobody said nothing [like this ]to us at all.

The 52-year-old was disgusted with what was a targeted racial attack on his business.

“It happened between 11pm on Tuesday (March 19) and Wednesday morning,” he explained.

“It’s still on the shutters now. I just don’t understand. Where am I living now? I belong in Solihull, England is my country.

Elsewhere, and in another racist vandal attack, a derelict pub in Kingstanding was tagged with, “England, No P****”.

The disgusting graffiti was spray-painted onto the walls of The Kingstanding, close to the shopping centre precinct.