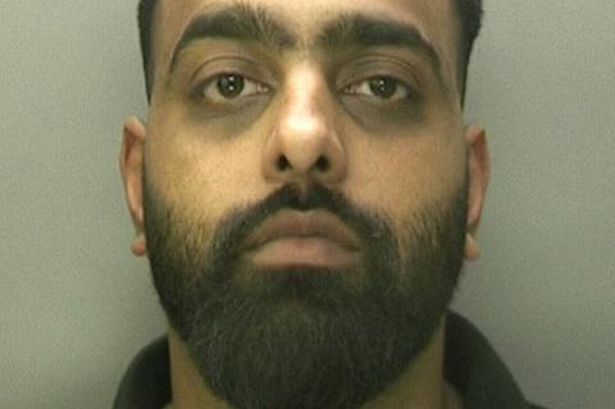 Taxi Driver Tanzeel Rehman a “trusted courier” has been jailed in drug smuggling after £400,000-worth of cocaine was found behind the passenger seat.

Rehman from Birmingham was returning from Luton with a consignment of high-purity cocaine when he was stopped as he left the M6 at Castle Bromwich.

National Crime Agency officers who had been monitoring his journey found four one-kilo blocks of cocaine, with a purity of 98 per cent, behind the passenger seat. During Rehman’s hearing no figure was disclosed but other recent cases suggest the drug could have been worth at least £400,000 once it had been divided into street deals.

Rehman, 24, of Kemp Road, Stechford, was jailed for four-and-a-half years after pleading guilty at Warwick Crown Court to possessing cocaine with intent to supply it

Warwick Crown Court heard traffic cameras showed Rehman had driven to Luton and meet someone in another car, which was “clearly where an exchange took place”.

Simon Burch, prosecuting, said Rehman, who had no previous convictions, then immediately set off to drive back to the Midlands.

He added: “We are unable to prove anything other than that the defendant was a courier.”

Tarlochan Dubb, defending, conceded: “On any view, he’s about to receive a very significant sentence indeed.

“My best point is that he pleaded guilty at the first opportunity at this court, and the prosecution accept the basis that he is no more and no less than a trusted courier.

“He’s been a taxi driver for three years, and apart from this he’s led a law-abiding and useful life. His family are utterly devastated at the predicament he now finds himself in.”

Judge Peter Cooke told Rehman: “Notwithstanding your youth and your lack of antecedents, it is apparent that you had lent yourself to a class A drug dealing enterprise in which, no doubt for a reward, you were prepared to play the role of courier.

“Your occupation as a taxi driver made your movements appear innocuous, but you were found in possession of four packages of very high purity cocaine.”