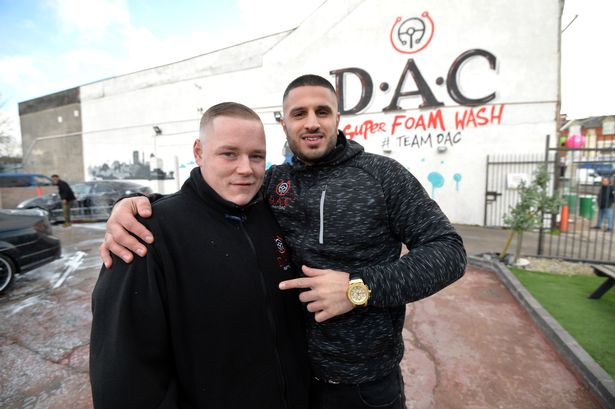 Shezad Zaman used to pass Kriss Wilkes every day after work and decided he wanted to help the homeless after finding Kriss begging on the street in Sparkbrook.

Not only did he offer Kriss a two-week trial at DAC Car Wash but also gave him accommodation.

Kriss has taking to his new role with such enthusiasm he has even danced in a promotional video waving improvised glow sticks which is posted on the company’s Facebook page.

Shezad said: “I saw Kriss on the street right outside the garage when I used to finish work.

“He would be collecting money by the traffic lights and I said to him, ‘you’re a local lad, you don’t need to be doing this, come and work for us instead’.

“He came in for a two-week trial and worked hard and showed me he was capable of doing what we do. He now works part-time and I have found him a room in one of my son’s houses.

“Kriss has had a lot of setbacks but I wanted to give him a chance to make something of his life.

“He’s happy and enjoying working with us.”

Kriss said: “I was a homeless man a few months ago, I was addicted to drugs but now I’m clean.

I used to sleep rough in my car or in shop doorways, in town.”

“When my dad died I came back and my head was a bit gone.

“I used to sit at some traffic lights on the Stratford Road in Birmingham and beg until one day when my gaffer, Shezad, came over and gave me a chance. He got me a room sorted and got me a job.

“He got me fresh clothes, trainers, shoes and basically I’m living alright and I’ve sorted myself out and I’m getting there.”

The staff at the car wash, on Stoney Lane, carry out a charitable mission every Christmas, this involves giving food to homeless people in the city centre, but this year Shezad only needed to look over the forecourt.