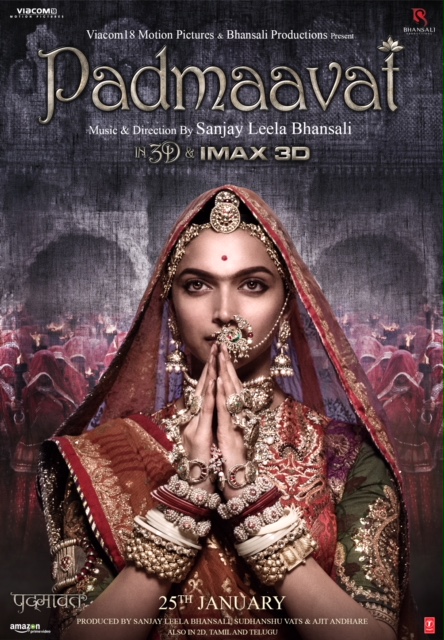 Viacom18 Motion Pictures announced 25th January, 2018 as the worldwide release date of ‘Padmaavat’. Directed by Sanjay Leela Bhansali, ‘Padmaavat’ is the first Indian film that will have a global IMAX 3D release. It has been cleared for release by the CBFC with a U/A release certificate post the incorporation of only 5 modifications.

Starring Deepika Padukone as Rani Padmavati, Shahid Kapoor as Maharawal Ratan Singh & Ranveer Singh as Alauddin Khilji, the film will also be released in Tamil and Telugu, in addition to Hindi.

Based on 16th century Sufi poet Malik Muhammad Jayasi’s epic poem Padmavat, the movie faced resistance from its early stages due to a misinformation campaign and rumour-mongering. Despite these challenges, the film that showcases the valor of Rani Padmavati, Maharawal Ratan Singh and the famed Rajput ethos of honour, bravery and sacrifice, has managed to overcome all odds; aided by the support of well-wishers from across the film fraternity, the government authorities and the society at large.

Sanjay Leela Bhansali said, “Padmaavat is a dream come true for me. I have always been fascinated by the stories of honour, valour and vigour of our great Rajput warriors that have been captured so beautifully in our literature and this movie is my homage to those glorious stories. I would also like to thank the entire film fraternity for supporting Viacom18 and Bhansali Productions through the entire production and pre-release phase and hope they like the film they so supported.”