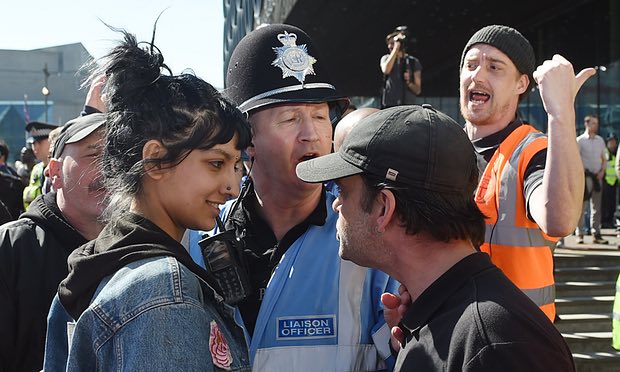 The British Muslim girl Saffiyah Khan, whose image of her coolly staring down a belligerent EDL member went viral, has met the girl who she was protecting during the incident.

The EDL march in Birmingham was attended by hundreds upon hundreds of EDL members, counter protestors and more. At one point, young Saira Zafar- wearing a hijab- was harassed by a throng of EDL members, which was what prompted Khan to swiftly step in. She told the BBC, “I don’t like seeing people getting ganged up on in my town.”

Now the two girls have met again under calmer circumstances, sharing a hug and expressing their love for Birmingham. Saira told her saviour, “I just want to say thanks a lot for your help and for stepping forward and supporting me in that situation. It did really mean a lot. And together we defeated the EDL, I would say, at that rally.”

Suffiyah replied, “I wasn’t going to let someone who was speaking the truth and being replied to aggressively be put in that position. You didn’t look like you wanted to be there and I have an intrinsic problem with that.”

Saira said she had attended the rally “to show that the EDL’s message is not acceptable and that it will be countered” and was then accosted by far-right protestors. One EDL member was even wearing a pig mask. Saira explains, “They were saying ‘You’re not English’, ‘This is a Christian country, not your country,’ and ‘Go back to where you came from’. I was alarmed and worried for my safety.” They held islamophobic placards, signs and flags around her head whilst hurling abuse.

They were saying ‘You’re not English’, ‘This is a Christian country, not your country,’ and ‘Go back to where you came from’.

Despite the heavy police presence, no one came to her aid and Saira was boxed in by the protestors. Suffiyah says they were 360 degrees around Saira and closing in. “There’s no excuse to be doing nothing really. Even if it means calling the police and saying I witnessed this.”

“There is no need for anything like this. I am sure we are more than capable of living together, united despite our differences.

Suffiyah added, “You only have to walk into Birmingham city centre to see how diverse it is. People of different colours, different religions. It’s an absolutely amazing city and such a beautiful city, and it’s nothing like the sort of message that the EDL came here to deliver.”

Crossland called Suffiya “a dirty unwashed leftwing scrubber” on Facebook. He also called her a ‘disrespectful witch’ that’s ‘lucky she’s got any teeth left.’ Tommy Robinson, the former EDL leader, said the entire episode was embarrassing for them, “I don’t care how many people don’t like me saying that, the truth is the truth…the picture is embarrassing.”