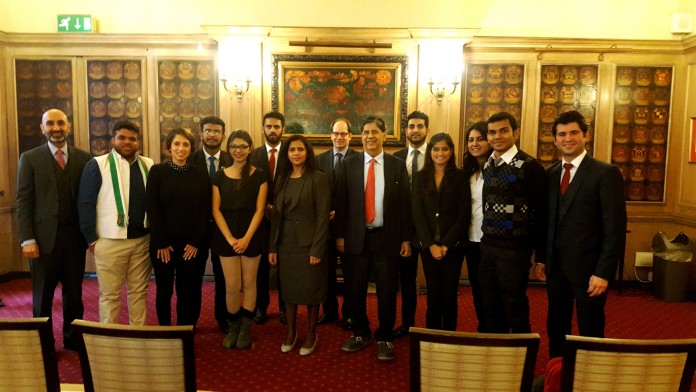 The event’s aim was to spearhead cross country partnerships between the Indian and British legal sector, with the view to expand the scope and interest of Indian students to pursue world class education in the field of law at some of the world’s finest universities based in the UK, offering direct access to the country’s legal market. This event was an eye-opener for students to understand and familiarise themselves with the possibilities in the legal sector, and especially the benefits of the British legal sector.

The UK’s legal system is globally recognised and used in commercial and financial centres around the world. Despite the number of Indian students studying in UK universities reducing by 10%, Indian students looking to enrol in law courses internationally still deem the UK to be one of the top choice destinations. Each year, around 18,000 students enrol on more than 1,500 law courses in the UK. Studying law in the UK offers prospective International law practitioners the benefit of utilising their degree to qualify practising in New York, UK, Australia, Singapore, India and other Commonwealth countries upon giving their respective bar exams. The other advantage is that both Indian and UK laws are based on common law, therefore providing graduates with the flexibility of returning home to practice.

Delegates from INBA included its representative Manuj Bhardwaj, along with students from various Indian law colleges such as from University of Delhi, School of Law Alliance University, Chanakya National Law University, University of Allahabad and Punjabi University.

The event commenced with the delegation assembling at Zaiwalla & Co’s offices in Chancery Lane where they experienced the office atmosphere of a British law firm.  The delegation and the firm’s team then arrived at The Law Society to commence the event proceedings. 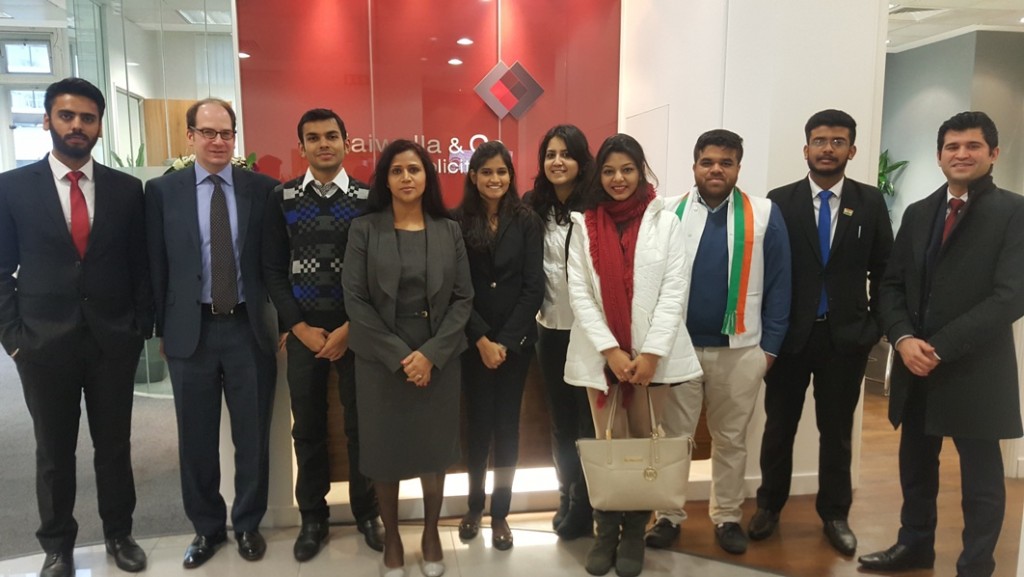 Welcoming the delegation on behalf of Zaiwalla & Co at The Law Society was Pavani Reddy, Managing Partner at Zaiwalla & Co, also the first Indian woman Managing Partner of an international law firm in London. Pavani Reddy has extensive experience working with Fortune 500 firms in international arbitration, litigation, commercial law and dispute resolution. Pavani Reddy introduced the visiting members to the UK’s legal sector, sharing her professional experiences and growth through the ranks of the city law firm after migrating to London from India. Opening the event she spoke about the firm’s 36 glorious years in the city, carrying values of east and the west. Highlighting the potential and the possibilities ahead in a fast changing world, she said: “The world is experiencing phenomenal change in all quarters, with the likes of Brexit in the UK, Trump in the US and demonetisation in India. In an internationally relevant sector such as law, staying abreast with the latest developments across all jurisdictions is what differentiates the best from the rest.”

Leading Queens Counsel, Jasbir Dhillon of Brick Court Chambers then conducted the keynote address at the event. He spoke about life at the Commercial Bar, drawing on his experiences right from graduating from Oxford and Harvard Law, and working in the US and the UK legal sectors to becoming the Queen’s Council practicing English law. Introducing his work to the students, he said:

“As a son of a farmer, and the first graduate in the family, it is of immense pride that I carry forward with me proud Indian heritage. Being a commercial law practitioner means that there is no typical day in the office. However to give a brief overview of what the work entitles, apart from advising clients on a regular basis, we are required to put in a lot of preparation for hearings, undertake extensive legal research, draft and edit written and oral submissions, and prepare for cross examining witnesses. While I practice commercial arbitration in London, the work also includes venturing into other jurisdictions including for international arbitration.”

Concluding on the experience of practicing law as an immigrant into the UK, he said “When I first started practice, there was only one other person of Indian origin, apart from me, who was qualified in the English commercial bar. Now there are many more, and I am confident the number will only keep growing. Commerce is global, and with India’s place in the global stage being more important than ever before, some of you will find that international arbitration is a prime career choice, and London is the best place to start.”

When I first started practice, there was only one other person of Indian origin, apart from me, who was qualified in the English commercial bar. Now there are many more, and I am confident the number will only keep growing.

Also in attendance at the event was Kamran Ashfaq, Executive Manager of the International Recruitment Team at the University of Law London, who shared the process of applying for law schools in the UK. Addressing the delegates of students, he said “We are all in a global world with fast changing dynamics. Our aim here is to get more international students into the UK during such an exciting period to benefit from the exceptional opportunity the country provides in the legal sector. The British education system continues to be a popular choice because of its reputation, and the value it commands world over.

As for studying law, one of the things we find with the international students is that they directly opt for LLB, which is of course of immense value, but if one is keen to practice in the country, it is quite important that they undertake the Legal Practice Course (LPC) or a Bar Professional Training Course (BPTC) to actually be able to work here.”

Joining Pavani Reddy from Zaiwalla & Co Solicitors was her colleague Saurabh Bhagotra, a solicitor and arbitrator with substantial experience handling high-value cases under the auspices of the ICC and LCIA arbitral institutions. He shared his invaluable experience of becoming a solicitor in the UK after completing a degree in law from India and subsequently complying to the QLTS grading in the UK.  Sharing his advice to the Indian students he said: “I had come to the UK to study my LLM, but I had realised that I had to complete a QLTS to actually practice here. While you may ask if it is worth putting  all that effort to become a dual qualified lawyer – my response to that is – it’s absolutely worth your time, effort and money. The legal market has changed, and in this interconnected world, where we are going beyond our national borders to do business and employment it is absolutely advantageous to be a dual qualified lawyer. England and Wales hold is one of the best places to gain a dual qualification, as most global law firms are either headquartered or operate out of here.

The legal market has changed, and in this interconnected world, where we are going beyond our national borders to do business and employment it is absolutely advantageous to be a dual qualified lawyer.

England and Wales hold is one of the best places to gain a dual qualification, as most global law firms are either headquartered or operate out of here.

“Also, 75% of the Fortune 500 companies choose to base or have a presence in London. This is a truly global city and being a QLTs qualification absolutely is a benefit.”

Speaking about the success of the event Manuj Bhardwaj of the Indian National Bar Association, he said: “INBA as a voluntary Bar association, is keen on expanding the horizons of the students and the law practitioners from India. This trip has been beneficial for establishing a connection with the UK legal sector and we are really thankful for Zaiwalla and Co. for hosting us.

We will take back with us, ideas, inspiration and aspirations with us with what based on the experiences we had in this exchange.”

Zaiwalla & Co Solicitors was established over 35 years ago, by Mr Sarosh Zaiwalla, who holds the prestigious title of Freeman of the City of London. He has been at the forefront of handling major cases in India which include the acting for the President of India in over three hundred Indian shipping maritime arbitration cases in London at a time when the nation was facing an economic crisis and had limited foreign exchange. The firm’s other distinguished clients include The Gandhi Family, The Bachchans, The Ruler of Dubai, The Dalai Lama, Tamil Nadu Electricity Board, Iran’s largest private bank, the People’s Republic of China (PRC), as well as the Russian Federation. Some of the recent high profile cases handled by the firm include representing Bank Mellat & Bank Tejarat – Iranian Private Banks against western sanctions, Petropars – Iranian Oil & Gas, Alexander Dobrovinsky – Prominent Russian Businessmen and Robert & Vincent Tchenguiz – London Based Property Billionaires.

Speaking about hosting the INBA delegation today in London Mr Sarosh Zaiwalla, Founder & Senior Partner said: “We are happy to facilitate the connection of the Indian and the UK legal sectors.  Both the countries share a spectacular history, with the UK’s common law forming the basis of India’s legal system, and English commercial law often the governing law in international contracts. The timing of this cannot be any better, and with Brexit oncoming, there is an immense scope for India and the UK to renew ties in the legal sector.

“More importantly, London is one of the best places to learn and practice law. The judges here are far and with integrity. As an international arbitration firm, we had benefited from the country’s legal offering and structure. A couple of years ago for one of our cases, we had successfully represented Iran’s largest private bank Bank Mellat against the UK government in this country’s very courts! In India the independence of judiciary is what we hope will develop in the near future. The cross country exchange will be beneficial for both to learn and grow.”

The speeches were then followed by an interactive question and answer section, before the delegation were taken for a tour of the historic English Commercial Court and the Royal Courts of Justice.