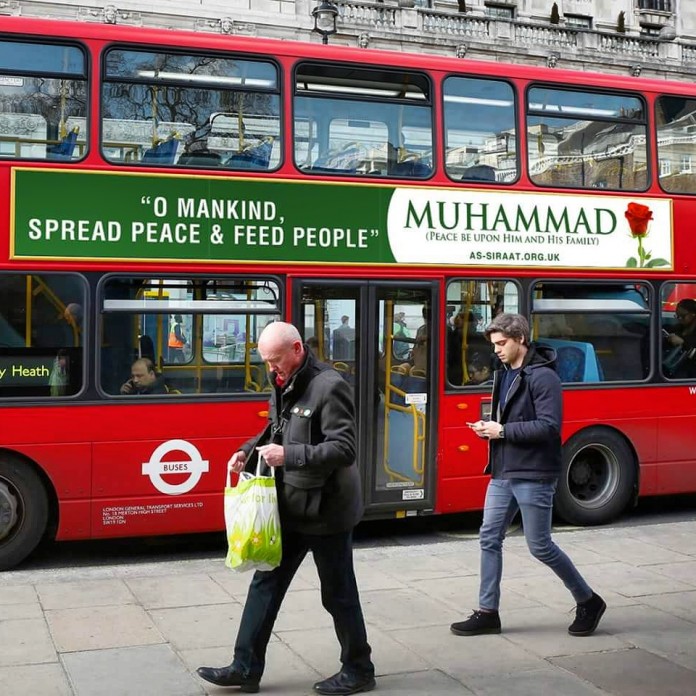 To coincide with one of the most auspicious months of the Islamic calendar and part of a number of events arranged by British Muslims, a four week nationwide bus campaign will be launched in the UK from Monday 5th December 2016.
The unprecedented campaign will feature over 128 buses throughout the UK carrying a universal message of goodwill and peace to all. Public transport buses from the south coast right up to Glasgow will carry the same message addressing all of humanity.

“O mankind spread peace and feed people” is one of the most well known and central teachings of the Islamic faith. The organisers aim to take this message to hearts and minds across the United Kingdom during the coinciding festive periods of Mawlid and Christmas respectively.

The campaign will culminate on Saturday 17th December 2016 with what has become known as International Mawlid in the City. This is a world-wide, coordinated event that takes place every year, with the aim of inspiring Muslims of all ages and backgrounds to make a positive contribution in their own local communities.

A global event, now in its fifth year, Muslims armed with roses and laden with the Prophetic 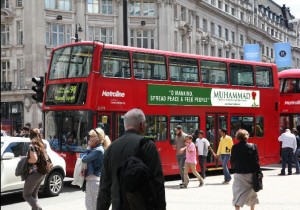 Participants and volunteers aim to once again coordinate over 125 locations across the UK and the World with many live events running simultaneously. These events will run throughout the UK in major City Centre locations including London, Birmingham, Manchester, Nottingham, Sheffield, Coventry,  Luton and Glasgow to name just a few. In numerous locations the events will include feeding of the homeless all coordinated through a central direction hub at the group’s head office in Birmingham.

A delegation will also present roses and the message of peace to Prime Minister Theresa May at 10 Downing Street to coincide with events across the world . International locations include USA, Canada, Trinidad, Guyana, Australia and many locations within western Europe.
Abdur Rehman Tobin a  co-ordinator involved in both events explains, “We’ve been running Mawlid in the City for the last five years to promote the true universal message and teachings of peace and mercy taught to us 1400 years ago.” Tobin goes onto explain, “Unfortunately in the current climate of fear, the true message of Islam has been lost. We give out roses and cards offering messages of peace. It gives an opportunity for people to talk to Muslims and ask questions and find out more to remove any misconceptions”. “This year we’ve managed to get over 128 buses to carry the message of universal peace to help share the Prophetic message of spreading peace and feeding people in what has been a very difficult year for all of humanity.”
Mohammad Amar, a senior scholar at As Siraat and its parent organisation Hazrat Sultan Bahu Trust adds “The arrival of December not only marks an important month for the Christian community, but it also coincides with the arrival of the blessed Islamic month of Rabi ul Awwal .”
“ Islam is of the balanced middle way and always has been, and we need to reaffirm this position”. “For this reason, we are propagating a positive, proactive message in conveying the real message of Islam to areas of the mainstream population here in the UK and abroad”. He further confirms, “Engagement2030 is a initiative from ourselves to reach out and engage with communities in the UK and beyond. Our work aims to break down barriers and reach out and engage in positive open dialogue with all”.