On Friday the 25th of November 2016, international humanitarian charity Penny Appeal hosted ‘An Evening with Maher Zain’, the first ever charity dinner event with the singer in the UK. The dinners were held over three consecutive dates in London, Birmingham and Manchester, entertaining over 1500 people. Funds raised at the charity dinners will be instrumental in helping orphans and vulnerable children worldwide.
The world famous singer and songwriter, Maher Zain, entertained the crowd and performed hit songs from his third album “One”. The award winning, faith-inspired artist performed live to his audience in a sophisticated and stylish setting, which captured the essence of the show.
The events each featured a live set, a full three course meal, and an interview with the man of the moment. The audience were graced with the presence of Sarah Joseph OBE, editor of Muslim Magazine EMEL, who was on hand to interview Maher Zain.
The Q&A session gave an insight into Maher’s life. He explained how he was on to the the edge of mainstream music success, but felt uncomfortable with many aspects of the industry.
As a result, he decided to embrace spirituality alongside his music – it was then that other doors opened for him. Since then, he has made musical history, and is one of the most successful artists in Malaysia and Indonesia, where he out-sells the likes of Adele and Justin Bieber.
Certain tickets also entitled select members of the audience to the full Meet and Greet 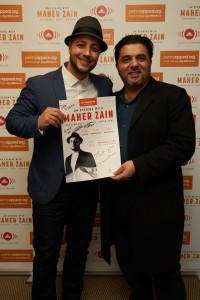