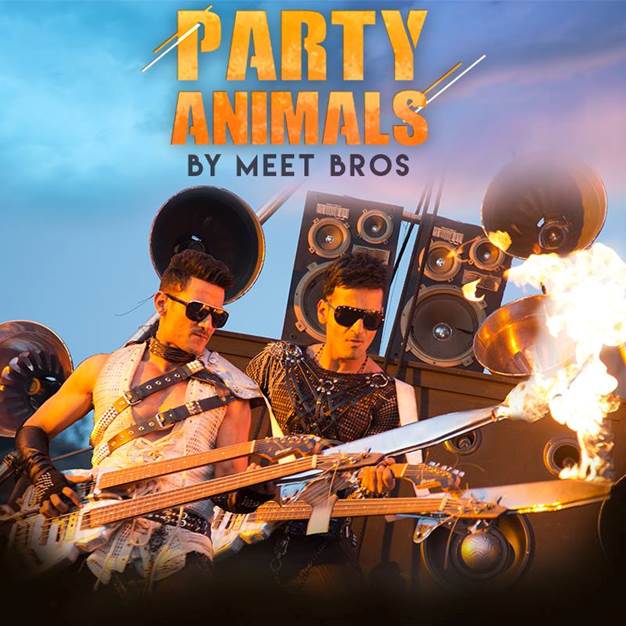 Be it Baby Doll, Chittiyan Kalaiyan, High Heels or the more recent Cham Cham, Ijazat or Girl I Need You, They have made you dance & romance to their tunes. Their music set the perfect party mood. Meet the new party animals in Bollywood – Manmeet Singh and Harmeet Singh, fondly and popularly known and credited as the ‘Meet Bros’. They are the dashing, unassuming boys who are churning hits after hits without knowing the deep plethora of music that lies within them. Maybe that’s what makes them so humble. Actors, entrepreneurs and music directors, the multi faceted duo are ready to set the screen on fire and are geared up for their brand new single Party Animals, out now.

How did the transition happen?
‘It’s time people see the faces behind that name. We are artists first and musicians later and that’s what we want the world to see’, says Manmeet Singh.

When producers are lining up outside their studio for more ‘Baby dolls’ and ‘Chittiyan kalaiyan’ the boys who are also focusing on their independent music say ‘We were always told by fans who saw us perform live that they would like to see us on screen & feature in singles, but it’s the T-Series head honcho Bhushan Kumar, who gave us the push and put his faith in us, after he saw us perform at Tulsi Kumars wedding’, says Harmeet Singh of the duo’.. The Brothers are extremely sought after in the party and shows circuit due to their kind of music and performance and thus it comes as no surprise that their first single is also titled ‘Party Animals’.

On quizzing how it was to face the camera and how much the brothers had to rehearse, they apprise us that’s this is not their first attempt in front of the camera. Manmeet who was a popular face on TV and Punjabi films at one time gave all that up for music along with Harmeet who was a model and an actor himself having featured in various commercials and TV Shows. ‘ So these days we are made to make the music and feature in the video as well.’ Well of whatever little we hear, producer and director friends of the brothers who have seen the video are already pestering them to act in their forthcoming projects.

T-series is not leaving any stone unturned to make sure the audiences lap up this single which is being touted as the most expensive independent song in the recent times. The single is co-produced by Meet Entertainment which is the Brothers first home production… It’s our maiden project and we can assure you that this is just the beginning,” states Harmeet.
The single is talked to be the next party anthem of the country the lyrics of which have been penned by the talented Kumaar. The Director & choreographer of the video Bosco & the creative director Rajesh Pandey have made sure the look, styling & the feel of the video that has never been seen before on Indian celluloid.. “Be it production value, locations of Bangkok or superlative quality of music, we have put our best foot forward,” says Manmeet. The song will release on YouTube on 9th May 2016. Here’s wishing the Hit Bros all the best for this venture

Party Animals is out now worldwide on Itunes.