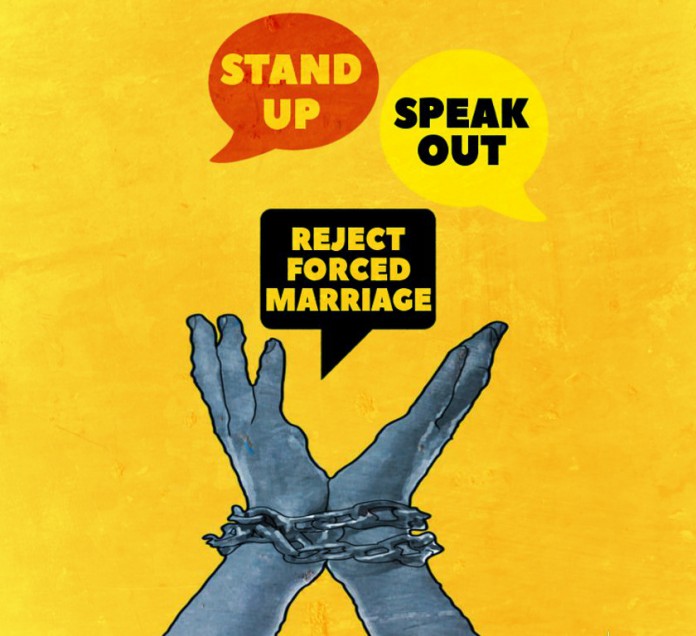 We’re calling for schools, colleges, youth centres and community centres to be directly involved in our ‘Stand up, speak out and reject Forced Marriage’ initiative. This initiative is about every part of our communities being a part of collective action to confront forced marriage. It’s only by being united in our courage can we shatter the barriers of this and cycles of violence and empower change.

A crucial aspect of this initiative is about giving the future leaders, teachers, journalists of tomorrow a platform to speak about and lead on taking action on forced marriage.

What lies at the heart of it all are the lives being affected. Forced Marriage is all of our problem. As a society we fundamentally reject slavery, violence, abhorrent abuse and human trafficking. Forced marriage is all of these is a human rights violation that no one can stand on the sidelines on.  There is no place in the 21st century for this injustice, this abhorrent practise and the cynical attitudes that still remain to tackling it. What we are witnessing with forced marriage is a human tragedy.

Tackling Forced Marriage one of the greatest human rights causes of our time needs to be talked about and solved.  It is all of our right to be educated, to define the course of our own life and choose who we marry.  Equal opportunity, equal dedication to life chances are the fundamental rights of everyone.
With one voice we’ve got to reject the cynical attitudes that still prevail as a barrier towards tackling forced and the inaction.  Forced Marriage is not an untouchable culture. A culture of fear and inaction only goes to further empower fear and strengthen those who carry out forced marriage and the so-called honour-based violence.  There should be no one in our society that’s told they don’t have a future.
Society needs to realise what exactly is at stake. The girls and boys who are facing forced marriage are the future doctors, leaders, teachers of our society.

The courage of Shafilea Ahmed, all those who have endured forced marriage and survived show us what is possible, we as a society have to meet that courage with the action that will break the cycles of violence forever.

It has to be realised that ‘forced marriage, shame, honour’ have to be seen for what they all really are, it is slavery and terminology of further attacks on human rights. The prevailing barrier, ‘that we can’t act because it’s our culture’, only goes to give this heinous crime a strengthened voice.

With persistence, courage, determination we will make the fundamental strides to achieve the progress that will shatter the barriers that hold forced marriage in place.

It’s about speaking up, insisting the challenge to empower change can’t be met alone; the responsibility of action to dismantle forced marriages and the protection of victims has to come from every part of our society. We all have a voice with the power to empower change. We’re all participants in it’s course, we can all take the action that will define differences, break silences, and shatter barriers.