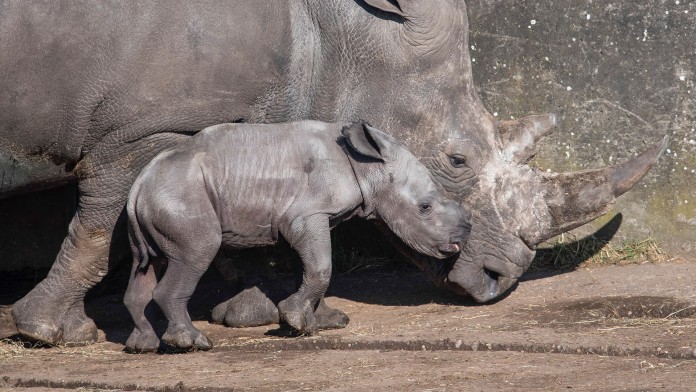 After a lengthy pregnancy of 16 months, first time mum, six year old Ailsa, gave birth to the long awaited new arrival on Good Friday, 25th March. This is the first baby rhino to be born at the tourist attraction since the baby’s dad Barney, who was born in 2005.

Within the first hour the cute youngster was up on his feet, demanding attention from mum. Ailsa will have her work cut out for her over the next few weeks, as the newbie needs feeding regularly throughout the day and will stay closely by her side for up to two years.

Southern white rhino are considered a conservation success story, with this particular subspecies being the most common of all the world’s rhino species. However, rhinos still face a huge threat in the wild due to habitat loss and more commonly, poaching.

Deputy Head Keeper of Ungulates, Lisa Watkins said, “The calf is absolutely gorgeous and his birth is not only fantastic news for the Park, but also for white rhino conservation. The International Union for Conservation of Nature lists them as ‘near threatened’ and with rhinos being poached every day for the trade in illegal rhino horn, we hope that our adorable newcomer will help highlight the very real danger the species still faces.”

She added, “The baby hasn’t got horns yet, but these start to develop straight away and can reach almost a metre when fully grown. Both mum and baby are doing brilliantly well and Ailsa is providing all the care we would expect, even though she is a first time mum. It doesn’t seem that long ago that the calf’s dad Barney was out and about, bouncing around the reserves and I’m sure he will be keeping his eyes on him when he makes his public debut onto the reserves, next month.” 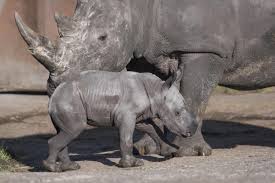 Although the new baby is only a few days old, he already weighs a whopping 67.5kg, but still has lots of growing to do – adult male rhinos are one of the largest land mammals reaching weights of around 2,500kg!

The not yet named calf is the newest addition to the Park’s small ‘crash’ of southern white rhinos, made up of four females and one male. It marks a great success for the Park’s European Endangered Species Programme, a breeding initiative of endangered species in association with the European Association of Zoo and Aquaria.

West Midland Safari Park hopes that the success of this birth bodes well for the future and keepers can look forward to welcoming some brothers and sisters in years to come.

The rhinos can be seen in the four-mile self-drive safari, included in the standard admission charge of £22.00 for adults, £17.00 for children aged 3-15 years and £20.00 for concessions. Children under the age of 3 years are admitted free of charge and admission includes a free-return ticket. Adventure Theme Park rides are charged extra.