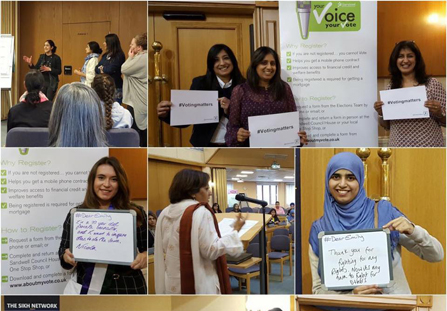 People of all faiths and backgrounds attended an event which encouraged more women to choose a career into politics.


The event was organised by Sikh public forum group, The Sikh Network in a bid to get women, in particular Sikh women, to think about a career in politics. There is currently no Sikh MP in Parliament.


Jess Phillips MP reiterated the importance of having women in politics, saying that events such as Women in Politics were important and a great way to get together and make a change together. “Whilst women issues still exist, we should not mourn, we should organise. Women have to stand up for women issues.” The Yardley MP for Labour shared her journey with the audience, and said she would help any woman who want to get involved in politics, “as they offer so much,”


Wolverhampton’s Conservative candidate, Suria Photay shared practical advice on how women can get involved into politics, giving sources of encouragement on how to succeed in the profession. “You need to focus on what you can do for people and not what your opponent can’t.”


The first Asian female parliamentarian in the whole of Europe, Neena Gill MEP, spoke proudly of her experience. “There is more to getting involved in the community than just politics, but it all starts from here. It did for me. I was really concerned about injustices. I want to see more female councillors, MPs and MEPs. We have to be able to allow women to find their own way.”


Kate Willoughby, remarkably drew the connection between the Suffragettes and the Asian community by reminding people of Sophia Duleep Singh. She also mesmerised the audience by performing a live rendition of Suffragette Emily Wilding Davidson’s speech in Parliament.


The Sikh Network’s Jas Singh concluded the speeches and spoke of the importance of putting on such events. “Sikhi is about activism. It’s about wanting to better your community. Today is one of the reasons why The Sikh Network was set up – because there is clearly an interest in politics from Sikh women and we will keep pushing for that first Sikh woman MP.”