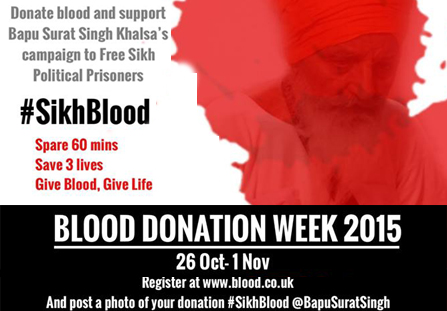 A national blood donation campaign has been launched in a bid to raise awareness of growing religious injustices.


The campaign, called #SikhBlood and which runs from October 26th to November 1st, will see Sikhs across the UK donate blood.

Throughout the week people will donate blood at donation clinics at Gurdwaras (Sikh temples).


The purpose of the charitable effort has been inspired by Human Rights Campaigner Surat Singh Khalsa.


Affectionately called Bapu, the 82-year- old American citizen and Indian native has been on hunger strike since January in an attempt to raise awareness about Indian government treatment of Sikh political prisoners.


Many of these prisoners were convicted under the Terrorist and Disruptive Activities Act (TADA) in 1985-95. This act was criticised, at the time, by human rights groups, and has since been withdrawn as it gave the state powers to detain suspects without charge. There were also widespread reports of the police extracting confessions under torture.


The week long campaign will involve Sikhs giving their blood for justice, something ingrained within the Sikh community. By bringing awareness to the situation, they hope to get Indian authorities to look into the case of imprisoned political prisoners.


Chaz Singh from Plymouth, a Sikh who is a blood donar said, “I have been moved by the images of Bapu Surat Singh over the past months. Blood donation saves lives and we are sure that hundreds of Sikhs will participate. This is regarded as a small sacrifice compared with Bapu Surat Singh’s hunger-strike to highlight human rights issues in India. I would urge all Sikhs to donate blood and play their part in this campaign.”


Event organiser, Dr Manjit Kaur Dhinsa, said the campaign is seen a concept of seva. “Many Sikhs regard Surat Singh’s hunger-strike as a service to humanity, a core principle of Sikhism. This is echoed in the campaign, which hopes to increase blood donations from Asian blood donors who are more likely to have a rare blood group. Currently the chances of a patient of Asian heritage finding a matching blood donor can be as low as 40 per cent compared to a Caucasian patient where the chances are closer to 90 per cent. The drive will be supported through a social media campaign using the hashtag #SikhBlood.”


The event falls in Sikh Genocide Week, a week which Sikhs from across the world remember those who died during the 1984 Delhi massacre.