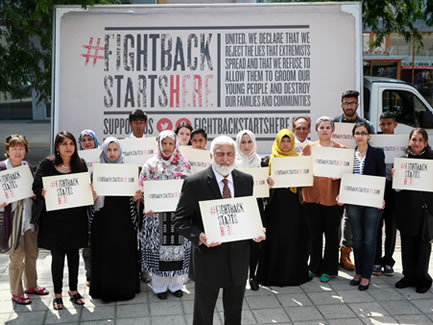 Representatives from community groups and civil society organisations from all across the UK have today joined forces at a launch in central London pledging their collective support to fightback against all forms of extremism.
More than 100 charities and other groups have also signed an open letter, which has been published today, alongside a national advertising campaign in major media publications, publically pledging their support for the #FightBackStartsHere campaign.
Speaking at the launch event Suleman Nagdi, representing the Federation of Muslim Organisations who are coordinating this nationwide initiative said: “For 30 years I have worked with other communities and faiths to promote harmony and fight against all extremists. Those who sow hate and prey on young people to encourage them to harm themselves, their families and the fabric of the communities in which they live must be stopped. Recent events have been a wake up call.
“It is great to see like minded people and community groups from all over the UK join this new movement and commit to win this battle. The fightback has to start right here and right now – everyone has to step up to the challenge. The fightback starts here.”
Hanif Qadir, the founder of the Active Change Foundation, said: “We support any initiative that looks to promote peace, harmony and fights for the truth against the hateful and dividing objectives of extremists.
“We continue to stand against the propaganda machine of those who wish to radicalise and harm our young people. We call on every individual, group and communities of all faiths and none to stand with us as together we are stronger. Let’s send a direct message that the #fightbackstartshere.”
Saleha Jaffer, Founder of Families Against Stress and Trauma (FAST) also speaking at the launch event in central London, said: “I have seen the damage those who wish to harm us all do to families. A lot of good work is done in communities in every town and city in this country to stop extremism hurting us. This new campaign will help us all to be stronger together as we unite in fighting back.”
In what is an unprecedented united stand, the signatories of the open letter and those who attended the launch event this morning aim to attract many other organisations, charities, groups and individuals to support the campaign.
The text of the letter is below:
“We represent charities, civil society organisations and safeguarding groups from across the United Kingdom.
We speak for the many religions, faiths, ethnicities, denominations, colours and creeds that make up modern Britain. And we each in our own way find ourselves on the front line of the battle against all extremists, who sow hate and prey on young people to encourage them to harm themselves, their families and the fabric of the communities in which they live.
We work everyday to protect young people at risk from radicalisation, but it is a daily battle and one that demands a coordinated and concerted response.
So today – with one voice – we launch our collective fightback against those who wish to do us harm. We reach across the boundaries of our backgrounds to come together in unity with one aim in mind – to protect our communities, our families, our young people and our way of life.
United, we declare that we reject the lies that extremists spread and that we refuse to allow them to groom our young people and destroy our families and communities.
We invite everyone who loves life – whether non-government, government, voluntary or private sector – to join us in shaping these solutions, because we know we face a common and determined enemy. It demands a common and determined response.
We can – we must – win this battle together. The fightback starts here”.