Aim to Spread Goodwill During Ramadhan 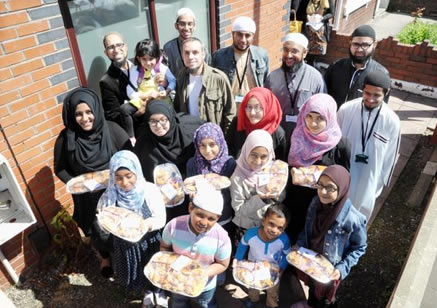 A national charity has distributed hot food to neighbours and a near-by care home in an effort to spread good will during Ramadan.
Based in Blackburn, volunteers from the Bayt Muhammed Academy delivered hot food to neighbours, a nursing home and town centre to provide food to the homeless.
Founded by Imam Irshaad Riyazuddin, the academy has been active within the community by running education courses and social gatherings for children and adults for the past five years.
He said, “We’ve recently entered into the holy month of Ramadan where Muslims fast throughout the day.
“It’s a time of reflection, prayer, charity and kind-heartedness particularly towards our neighbours and the disenfranchised in society.
“We really wanted to make this Ramadan special and what better way to do it than to reach out in compassion and generosity to those in need.
“We had more than 30 adults and children take part and the reaction has been very positive.
“People were very surprised that we were doing it during the day when we were fasting.
“This is the first time we have organised something like this in the area and we wanted to make this year different from previous years.
“I would say that it has been a real success and I hope that we are able to do something bigger next year as well.”
Taking part in the event, Tahir Anwar said, “It was really important for us to have the children involved in this as it teaches them important lessons.
“It’s much better for them if they are out and about doing this kind of thing instead of just sitting in a classroom and reading about it.
“I’m really pleased with the whole event and that we got such a nice reaction.