Home Sports Nurturing the Next Generation 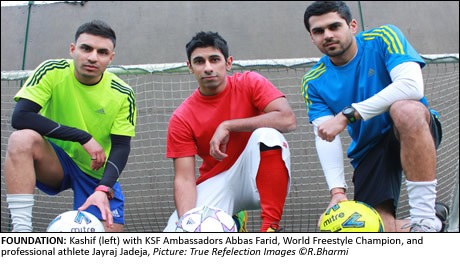 HE’S plyed his trade across the world, but now British Asian footballer Kashif Siddiqi wants to help inspire the next generation of footballers.
The footballer, described as Pakistan’s footballing globetrotter, launched the Kashif Siddiqi Foundation recently in West London. Having played for Fresno Fuego in America, AL Wasl FC in Dubai and representing the Pakistan National Team in Asia has earned him this title. Only this month, he added another chapter to his story by signing a new contract with Ventura County Fusion in Los Angeles, California.
With the foundation Kashif’s aim is simple – to tackle the under representation of the Asian community in the football profession – and he’s already hard at work.
He kickstarted his first project in West London, at Harlington Community School and the success of the term project with the school has already sparked the interest of other schools around London and across the country – including right here in the Midlands.
But what makes the KSF special is that it aims to teach children more than just football.
The Foundation aids in the development of young children both on and off the pitch, while engaging parents and seek to bring out behavioral changes.
Education is the main platform to such success, learning and adopting skills that can benefit the student in the classroom as well as in the theatre of competitive sport. And the KSF Foundation aims to use football as a catalyst to create awareness of health, enlighten parents around the benefits of education through sport and support community development.
Despite signing a new contract with Ventura County Fusion in Los Angeles, California, Kashif has taken time out of training to appear at the workshops he believes will help nurture children both on and off the field.
He believes a hand’s on approach is needed to set up his vision and was in Hayes, West London last month to see the first crop of players at his football development centre. The group of 13 and 14-year-old pupils from the school, finished their five-week course in front of proud parents on the touchline.
The footballers insight into the struggles that Asian players face has seen him address and get the support of a number of key partners including the Football Association, the Professional Footballers’ Association and Kick It Out to name but a few.
Through KSF, Kashif intends to pass on his knowledge and experience of the game that will equip the next generation of potential athletes with the tools to progress and flourish not only as sportsmen and women, but also inspired and stimulated young adults.
“Through my career I have learnt that education and sport can help us in different ways in order to achieve sustained success in life,” Kashif told The Asian Today.
“KSF’s mantra is that “both sport and books go hand in hand, but educate us in diverse ways. The opportunity to be working with kids and helping them grow both and off the field is incredible.
“Honestly, If I had something like this when I was growing up, I may have been able to avoid a lot of barriers, I have had to overcome. I hope KSF will make things easier for the next generation.”
To learn more about the KSF Foundation please visit www.ksffoundation.org  and www.kashifsiddiqi.com

‘We’re so Proud of Jaskinder’