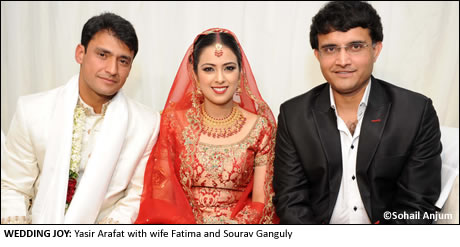 NEWLY wed Pakistan cricketer Yasir Arafat has revealed the joy of getting married was even better than making his debut for Pakistan!
The cricketer was all smiles as he married Fatima Sheikh in a star-studded ceremony on Sunday at the Oval cricket ground – home of his current team Surrey County Cricket Club.
The couple looked stunning in traditional Asian wedding attire created by London based designer Raahat.
The wedding marked a victorious personal ‘hatrick’ for Yasir starting with Surrey’s promotion in the County Championship from Division 2 to Division 1, followed by his participation in Surrey’s victory over Somerset on Saturday and the icing on the cake – his wedding on Sunday.
“Undoubtedly, the weekend is the biggest of my life,” Yasir said.
“There have been some huge occasions such as my debut for Pakistan, but of course marriage is such an important and big occasion.”
A host of cricketing stars – including Azhar Mahmood, Saqlain Mushtaq and former Indian captain Sourav Ganguly, joined in on the wedding festivities.
Yasir added: “I’m really pleased that so many friends and family members attended the function and I request all of them and my fans around the world to pray for a happy and successful future.”

The Romans regarded as that female mammals happened to be pushed mad by sexual...