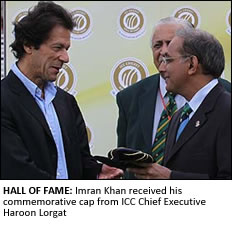 PAKISTAN legend Imran Khan became the fourth Pakistani to be inducted formally into the ICC Cricket Hall of Fame, atLord’s on Wednesday.

Imran joins batsmen Hanif Mohammad and Javed Miandad as Pakistan’s representatives in the initial intake of 55 players into the Hall of Fame, a joint venture between the ICC and the Federation of International Cricketers’ Associations (FICA). The trio were joined last year by Wasim Akram who was voted in at the end of 2009.

After the presentation during lunch at the MCC Spirit of Cricket Test match between Pakistan and Australia, Imran said: “It is a great honour to be inducted into the ICC Cricket Hall of Fame and to be recognized for my cricketing achievements for Pakistan.

“I achieved many things during my cricketing career, including winning a World Cup in 1992, but to be named amongst the initial 55 inductees, alongside Hanif and Javed makes me very proud.”

His career averages put him at the top of the quartet of all-rounders –  Sir Ian Botham, Sir Richard Hadlee and Kapil Dev – who dominated Test cricket during the 1980s.

He led Pakistan to its first series victory in England in 1987, taking 10-77 to claim victory for the side at Headingley after every other match of the series had been drawn.

The crowning glory of his 21 years at the top of international cricket came in 1992 when he led Pakistan to victory in the Cricket World Cup over Graham Gooch’s England by 22 runs. The side Imran led featured two of his fellow Pakistani Hall of Famers – Javed and Wasim while the side faced featured fellow Hall of Famers Gooch and Botham.

ICC Chief Executive Haroon Lorgat said: “It was an honour to present Imran Khan, one of the true legends of the game, with his ICC Cricket Hall of Fame cap at Lord’s during such a historic Test match. Imran’s brilliance in Test Match cricket and in the 50 over One Day International format had captured the imagination of fans, including me, across the world. He played in great spirit and built a reputation as a magnificent all rounder in both formats.

“The Hall of Fame continues to recognize the players who have built the legends on which our great sport is built.”

Ajay Devgn goes an extra mile for ‘Son Of Sardaar’

The Relevance of Gandhi in the 21st Century