Tributes pour in for Indian star 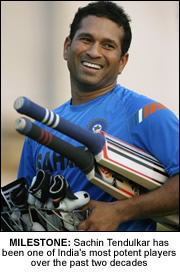 WHEN Sachin Tendulkar walked out onto the Ahmedabad cricket pitch earlier this week for the first Test against Sri Lanka, he made history.
Celebrating two decades as an international cricketer, Sachin has emulated a fete only a few of our greatest cricketers have accomplished.
As the first Indian player to achieve the milestone, his revered stance in his home country looks less likely to diminish.
It was in Karachi on 15 November 1989 where a young 16-year-old Sachin graced the cricket world with his Test debut.
It didn’t go too well – 15 runs and bowled by fellow Pakistan newcomer Waqar Younis – but as history will tell us he made up for it in years to come.
A 20 year career with India netted a host of records. He has played a record 159 Tests for India, holds the record of being the highest run-getter and century maker in both the Tests and ODIs, and is the only batsman in the history of the game to break into 17,000 run mark in ODI’s.
Sachin himself once said: “My only dream was to wear the Indian cap and the Indian colours. In that respect, my childhood dreams have come true.”
It is a dream that Indian cricket has been only too happy to oblige.
On this historic day who better then to comment on Sachin as one of the world’s greatest cricketers then those from the game itself.
Below are just some of the tributes that have poured in…
Mahendra Singh Dhoni, India Captain
“I hope Sachin marks 20 years in international cricket with a century in this Test. The hype over Tendulkar’s landmark is not a distraction. In fact it’s an inspiration for all of us. Tendulkar continues to be a prolific run-getter for India and a great ambassador for the sport. Indeed, a player like Tendulkar is born once in a century. We all know that his dream of winning a World Cup is the only thing that remains unfulfilled. As captain of the Indian team, I hope that we win the 2011 World Cup for him. It will be a fitting tribute to a man who has given so much to the country.”
Sourav Ganguly, former Indian Captain
“Sachin is the best batsman I have seen. He just amazes me. He just keeps going on and on. We hope he carries on some more years. It’s not just about talent but it’s how you use talent that makes you special. There have been a lot of players who had talents but they have not continued for a long time and that’s what makes Sachin special. He uses his talent to the most.”
Muttiah Muralitharan, Sri Lankan Leg Spinner
“What can I say that has never been said about him before? It’s a privilege for those who have played during his (Sachin’s) time and so got associated with him. Personally, for me, bowling to him has been a privilege.”
Imran Khan, former Pakistan Captain
Today, Sachin seems to be completely in charge of his game and can switch gears almost at will. He can be explosive at times, and he can construct an innings if he has the time. It is this intelligence and thought that has helped Sachin stay focused on his batting. It is not a case of talent alone, because mere ability no matter how prodigious does not sustain itself long if temperament and hunger is lacking. I have seen far too many talented cricketers not achieve what they could because they lacked the temperament. If there is one area in which Sachin is ahead of his contemporaries, it is focus. Inzamam-ul Haq was possibly even more gifted, but Sachin was more successful due to his commitment and focus.

I would imagine that he will be around for the World Cup in 2011, and the Indians would hope that they see one last flourish from him.”
Rashid Latif, former Pakistan captain
“I see him continuing until more landmarks like 50 hundreds. 100 centuries is not difficult for him because the passion for the game is still very much there even after 20 years. I played with him in England and batted with him too and every time I asked him ‘before the ball pitches how do you come to know which kind of delivery is coming? You also pick up the length so quickly’. Tendulkar just smiled but didn’t let out his secret. It was an honour playing some matches with him and sharing the same dressing room. Despite his success he was very humble and friendly with all the other players. I know he is a very patriotic person but in the dressing room he was very friendly with me as well.”
Aamir Khan, Bollywood actor
“What is amazing about Sachin is that for 20 years he has been able to maintain a level. There has been no dip in his abilities, his application or his passion for the game. I would say very few people could last this long. I’ve played cricket and believe me, you can’t get out of bed for one week after one gruelling match.”
Quotes gathered from ‘The Times of India’ and ‘PTI’ 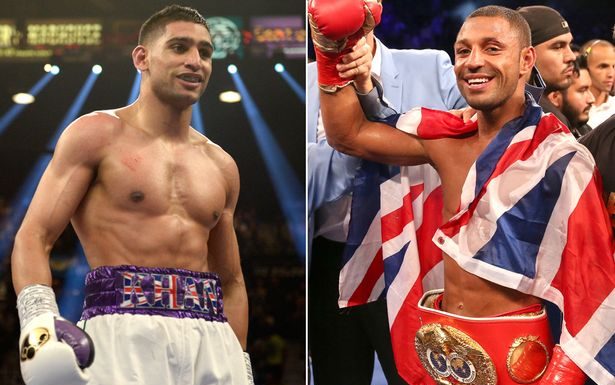 Possible Khan and Brook Fight in 2020