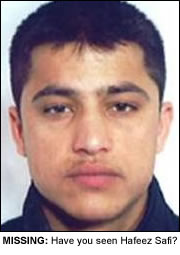 POLICE are concerned for the welfare of a missing 15 year-old boy who has been missing for five weeks.
Hafeez Safi, 15, went missing from his address in Victoriana Way in Handsworth, Birmingham on 28 September.
He was last seen leaving for school but he did not arrive. Police said the youngster has been missing before.
He is described as Asian, 5ft 8ins tall, slim build, short black hair and clean shaven. Hafeez was last seen wearing his school uniform – black trousers, white shirt, green and blue striped tie and black jacket.
It is believed he took some clothes with him.
Police would urge Hafeez or anyone who knows of his whereabouts to call Bridge Street West police station on 0845 113 5000.