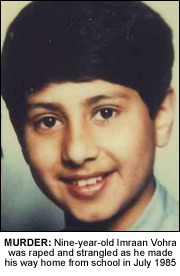 THE MURDER of a Preston schoolboy has finally been solved – 24 years on.
Nine-year-old Imraan Ismail Vohra disappeared as he made his way home from Frenchwood Junior School in Avenham on 11 July 1985.
His body was found two days later. He had been raped and strangled.
Despite a full-scale inquiry at the time, Imraan’s killer was never caught.
But detectives vowed to continue in their hunt and in 2001 a large scale forensic swabbing operation took place across the UK.
More than 1400 men were sampled and compared against an unidentified DNA sample, believed to have been that of the murderer which was left at the scene.
And last week forensic experts finally made their breakthrough.
Detectives say a DNA sample left at the scene 24 years ago has finally been matched to Robert David Morley, who lived in the Avenham area at the time of Imraan’s murder. He died in Essex in 1997.
Scientists say the chances of Morley not being responsible for Imraan’s murder are a billion to one.
Morley, a father of seven, lived at various addresses in Lancashire between 1979 and 1987 having moved to the area from London.
Detectives said he committed a string of petty theft related offences throughout his life.
Detective Chief Superintendent Graham Gardner, Head of Crime for Lancashire Police said detectives were keen to hear 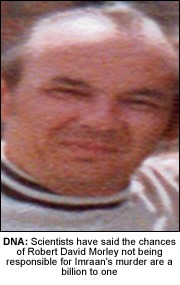 from anyone who knew Morley during his stay in Lancashire.
“The findings clearly point to the fact that Robert Morley is responsible for Imraan’s death and we are now endeavouring to find out more about his life in Preston,” he said.
“I would be interested to hear from anyone who knew Robert Morley, known as Bob, in or around 1985 in Preston.
“Imraan’s family have conducted themselves with great dignity in the most distressing circumstances for many years. I am very grateful for their continuing support to my investigations and hope that this breakthrough helps them with their grieving process.”
A statement released by Imraan’s family said: “As a family we would have liked to have seen justice in the courts, but justice will be done here after. Although Imraan’s death will never go away, we would like to move forward and ask that our family be given privacy and respect at this difficult time.”
Anyone with any information about the case or in particular Robert Morley should call Preston Police on 01772 203203 or 08451 25 35 45.