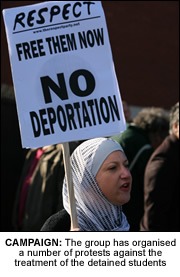 A GROUP campaigning for the release of seven Pakistan students detained without charge and whose cases are being heard in a ‘secret court’ by the British government has described their treatment as a “mockery of justice”.
Tariq Mehmood of the Justice for the North West 10 campaign said he was angered at the treatment of the men and urged the public to support their release.
The students were part of a group of 12 who were detained following raids across the North West earlier this year in what Prime Minister Gordon Brown described as “a very big terrorist plot”.
But in a major embarrassment for the government all terror charges were eventually dropped after police admitted there was no criminal case to be made.
However the Home Office re-arrested the men in an attempt to deport them on national security grounds.
Of the original 12 students that were arrested on terror charges, two, Hamza Shinwari and one who was a minor were released.
Ten were ‘released’ from police custody but immediately imprisoned as CAT A prisoners awaiting deportation to Pakistan.
Since then, Tariq Ur Rehman a widower, with three children has gone back to Pakistan, while Sultan Sher and Janas Khan were freed on 17 July.
The seven students who appealed for bail last week included Abdul Wahab Khan, Shoaib Khan, Mohammed Ramzan and Ahmed Faraz Khan and three others who cannot be named for legal reasons.
The seven remaining students are being tried by a Special Immigration Appeals Court meaning they are not informed of the case against them and their lawyers cannot defend them before the court.
And in fresh developments that angered their supporters, the students were denied bail last week meaning they could spend the next 10 months in jail until their next hearings are due.
“It is a mockery of justice to hold people in prison for a year without charge and without telling them what the evidence against them is,” Tariq said.
“What sort of justice is this where part of the hearing is behind closed doors, where secret evidence is secretly heard, of which neither the defendants nor their lawyers are aware and as a result people whom the police have declared to be innocent are going to remain in prison as Category A prisoners?”
Since starting their campaign, Justice for the North West 10 has grown across the UK with branches in a number of cities including London, Birmingham and Liverpool.
They have now set up an online petition and are urging Britons to support the detained students.
“This is a political case, not a legal one,” Tariq added. “Everyone thinks they are being held as terrorists – that’s how the government has portrayed it – when in fact this is an immigration case, much of it relating to visas. What brings hope is if students and others start to challenge what is going on.”
To sign the petition log onto www.j4nw10.org