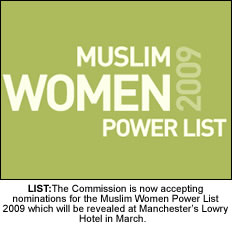 THE Equality and Human Rights Commission today launched the first ever Muslim Women Power List.
The Power List aims to celebrate the achievements of British Muslim women who have already reached the top of their chosen field or are on the fast track to success.
The Commission is now accepting nominations for the list which will be revealed at Manchester’s Lowry Hotel in March.
This is the first time an organisation has sought to identify and celebrate professional Muslim women in this way.
The project is piloted this year with a view to maintaining a network of women who can benefit from each others’ experiences of forging a career.
Trevor Phillips, Chair of the Equality and Human Rights Commission, said: “Society is in the habit of putting labels on people.  There aren’t many groups I can think of who are more stereotyped yet less understood by the wider community than working Muslim women.  I hope our first Muslim Women Power List will make the rest of Britain sit up and take note – many members of the Muslim community are making a valuable economic and social contribution to our future.”
The Muslim Women Power List forms part of the Commission’s ‘New Voices’ strand of work, which aims to search for new audiences, who may often go unheard, and give them a platform to speak.
For more information log onto www.thelist2009.com