They have failed their voters, says Respect MP 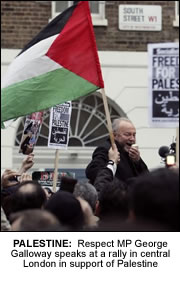 RESPECT MP George Galloway has hit out at Muslim MP’s for not reflecting the feeling among Muslim communities in Britain over Israel’s military onslaught in Palestine.
Mr Galloway, who has already spoken at a number of rallies against Israeli action, also accused Parliament of not representing public opinion.
His comments came as Birmingham City Council moved to support the people of Palestine yesterday.
“Foreign Secretary David Miliband made his statement on Gaza to what ought to have been a packed chamber on Monday, but most MPs were absent,” Mr Galloway said.
“Supporters of the Israeli government were there en masse to back the government and the double standards it is applying, refusing to acknowledge what UN officials are calling war crimes committed by Israel.
“There were precious few of us to raise the voice of the Palestinians – though some of us did get to speak, none more strongly than Gerald Kaufman, MP for Gorton, who rightly declared that Omert, Livni and Barak are mass murderers.
He said he was “shocked” at the short numbers of Muslim MP’s in Parliament on Monday who “owe their seats to Muslim voters.”
Mr Galloway added: “Most conspicuously absent were Muslim MPs themselves. Only one was present – Shahid Malik – and as a junior Foreign Office minister he was sat along the bench from Miliband supporting his boss. People across the country should demand their MPs speak out, or hold them to account.”
Birmingham Respect councillor Salma Yaqoob, who is the chair of the anti-war movement in the city, has been at the centre of organising huge protest meetings over Gaza and yesterday introduced the issue at a meeting with Birmingham City council members.
Other councillors from across the political spectrum followed her lead – including Lib Dem Cllr Tariq Khan and Cllr Tahir Ali of the Labour Party.
This resulted in a memorandum to the officers of the council asking them to construct, in discussion with central government, the legal basis for the council – Europe’s largest local authority – to pursue a policy of boycotting and sanctioning Israel.
“This is a significant breakthrough,” said Cllr Yaqoob.
“It is vital that the political process is responsive to the feelings of people over this hideous destruction in Gaza. That is the way to true community cohesion and strengthening democracy.”