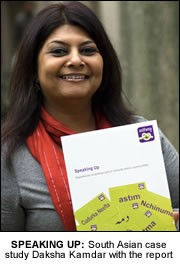 ASTHMA sufferers from an Asian background are being confronted with a poor and inaccessible service from the NHS, a leading charity has claimed.
Asthma UK said because of a lack of support and information they are struggling to control their asthma and are forced to live with unnecessary symptoms that can escalate into life-threatening asthma attacks and emergency hospital admissions.
The charity has produced a new report called Speaking Up to back up their claims.
They are calling on the Government to take steps to safeguard the health of South Asian and other minority ethnic groups who are being let down by their current services.
The charity spoke to over 600 Asthma sufferers across England.
Their findings found that Bangladeshi people were amongst those with the worst outcomes and experiences of asthma services. Only 43% of Bangladeshi people surveyed thought that their local asthma services were culturally appropriate and in the month before the survey, 62% had experienced difficulty sleeping due to their asthma symptoms.
65% of Pakistani sufferers spoken to said it would be useful for someone within the community to give them more information about local asthma services, while Indian sufferers generally reported a moderate level of symptoms but they were the least likely to know what to do, or where to go for help, during an asthma attack.
Neil Churchill, Chief Executive Asthma UK said: “The impact that high hospitalisation rates have on South Asian communities is unjust and unsustainable. We’re asking that the Government develop and implement a clear asthma strategy to ensure that people from these communities are no longer put at risk by poor asthma services.
“Unnecessary asthma admissions cost the NHS millions of pounds every year and this money could be better spent on providing good asthma care that will keep people out of the emergency rooms.”