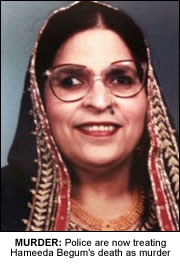 A BLAZE at a Bolton home which claimed the life of an elderly woman was started deliberately, police have revealed.
71-year-old Hameeda Begum died in hospital just hours after she was rescued from her home on Little Holme Walk, Great Lever a week ago.
A 24-year-old woman and a five-year-old girl remain in critical condition in hospital.
Three firefighters were also injured in the blaze. One of the officers suffered up to 50% burns to his lower back and legs, and serious burns to his hands.

Mrs Begum’s husband, Mumtaz Ahmed Chisty said his wife had “sacrificed her life to save her children and me”.
Detectives investigating the fire are treating the death of Mrs Begum as murder after revealing a rubbish bin had been propped up against the front door of the house and deliberately set alight.
Detective Superintendent Sam Haworth from the major incident team said: “We are treating this fire as arson and therefore the tragic death of Hameeda will be treated as murder.

“Two people still remain critically ill as a result of this fire and it is vital that we find out who is responsible for starting this devastating blaze.

“I know the community are as committed as we are to finding out who did this, and we still have a dedicated team of detectives working on this case. I still want to hear from anyone who was in the vicinity of Little Holme Walk between 10pm and midnight last Monday, any information could prove vital.”