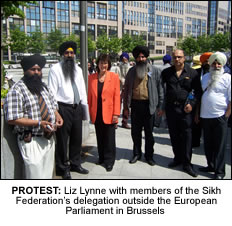 A EURO-MP has hit out at the European Parliament after a Sikh delegation from the West Midlands were refused entry because some were wearing a ceremonial dagger.
Liberal Democrat Euro-MP Liz Lynne called the decision “outrageous” saying other member of the Sikh Federation not wearing the ceremonial dagger, called a Kirpan, were also denied entry.
It is the third time in a row that the Sikh group has been refused entry into the Parliament.
Following the decision the delegation protested outside the European Parliament and were joined by Ms Lynne.
She said the European Parliament were “unjustified” in their treatment of the group.
“This decision is outrageous. In the UK the right to wear the kirpan is enshrined in law, as it should be across the EU”, she said.
“Sikhs have made an outstanding contribution to the wealth and diversity of society in the West Midlands and elsewhere across Europe, and to treat EU citizens in this way is totally unjustified.”
Ms Lynne said she would be taking the issue further.

”I wrote last week to President Pöttering of the European Parliament hoping to ensure entrance for my constituents but to no avail. I now hope to lead a cross party campaign on this issue to ensure this discrimination cannot be allowed to continue here or anywhere else”, she said.
“The Sikh faith should be recognised throughout the EU, kirpans are widely regarded as a religious symbol, not a threat, and to refuse entry to those wearing them is discrimination pure and simple.”

On the role of the EU’s anti-discrimination legislation in combating discrimination faced by Sikh’s in the workplace, Ms Lynne added: “If we are to remove discrimination from all places of work across the EU, including this Parliament, we need to ensure the 2000 Employment Directive is properly implemented across Europe, something which many Member States have failed to do.


“I hope anyone who feels they have been discriminated against in the workplace finds the courage and support they need to take further action.”