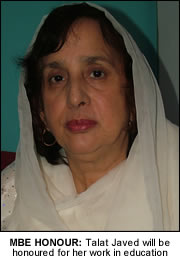 WHEN retired Birmingham tutor Talat Javed began teaching Urdu at South Birmingham College in 1989 little did she realise her dedication would result in her meeting the Queen 18 years later.
Mrs Javed, who lives in the Kings Heath area of the city, has been recognised in the New Years Honours list for her services to Further Education.
She will be awarded an MBE following a nomination for the prestigious honour by Alan Birks, ex-principal of South Birmingham College, who also retired last year.

Mrs Javed began teaching Urdu at the College’s Hall Green campus in 1989. She also regularly writes articles, features and short stories for community and international newspapers, which included Ravi Weekly for 26 years which was distributed worldwide until recently.

Last year Mrs Javed taught seven of the top ten highest achieving students in the country in GCE Urdu according to Edexcel, the UK’s largest awarding body.
With more than 18 years of teaching at the College she continually received good inspection results with one report quoting that Mrs Javed’s lessons were the best they had ever observed.
Mrs Javed said she was “overwhelmed” with the honour.
“I’m absolutely overwhelmed; it’s such a great honour.  My telephone has been ringing non-stop since the list was published, with many of my ex-students congratulating me,” she said. .


“I’ve always encouraged my students to aim for the best possible grades they can achieve, and extend their learning beyond the classroom by getting involved in community events and reading literature widely.  I hope this honour is an example of what can be achieved.”

This is not the first time Mrs Javed has been recognised by the Government. In May 2007 Talat was invited to Downing Street to meet the then Prime Minister Tony Blair to talk to him about a range of issues facing Muslim women.