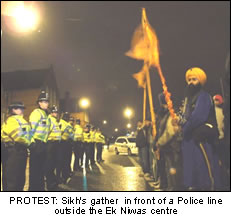 A MIDLANDS Sikh group who took part in protests outside a Wolverhampton multi-faith centre over the storage of the Sikh holy book have defended their actions.
More than 400 protestors converged on the Ek Niwas centre in Dudley Road, Blakenhall on Sunday in protest over the storage of the Sikh Holy book, the Guru Granth Sahib, at the temple.
Ek Niwas, which is a registered charity, is a multi-faith centre which encourages people from different religions to use its facilities.
But protestors complained about the use of the Guru Granth Sahib at the temple saying it was frequently disrespected.
Uniformed officers were present at the protest and were called into action later in the afternoon when scuffles broke out.
Raj Singh from the Sikh the Truth group defended their actions and accused the centre of “deliberately setting out to provoke the sentiments of the Sikh community”.
“Sikhs are a community who are not only tolerant to other faiths but also respect other peoples beliefs. In so doing Sikhs do not have anything against Ek Niwas; nonetheless when the question of respect to our eternal Guru Sri Guru Granth Sahib Ji arises, Sikhs will not sit aside whilst their Guru is confined to an inappropriate location”, Mr Singh told The Asian Today.
The group alleged the holy scripture was placed in an area containing idols from other religions, which they found offensive.
In July, Ek Niwas had agreed to hand over the Guru Granth Sahib for transportation to India following meetings between the multi-faith centre, local Gurdwara’s and representatives from the Gurdwara Councils of Sandwell and Wolverhampton.
But members of the local Sikh community were dismayed two more volumes of the Guru Granth Sahib had been purchased and were being housed at the centre.
The protest, which reached numbers of 500, ended when the centre allowed local representatives to take out the holy scriptures. 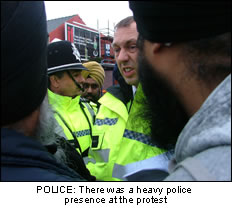 But Ek Niwas leader Babaji Darlochan Singh defended the centre saying its aims were to “settle disputes between religions and end fighting”.
“It was disgusting what happened on Sunday night. We are peaceful people. We don’t want any sort of trouble but people just turned up outside our door and attacked us”, he told the Birmingham Mail.
And one local Sikh woman who attends the centre told The Asian Today she was stunned at the protest.
“It’s a place where any one from any background can go and pray and unite together”, 29-year-old Sukhbinder Kaur said.
“I have been going to Ek Niwas for some time now and I have never seen the Guru Granth Sahib be disrespected in anyway”.
Mr Singh from Sikh the Truth added it was the responsibility of the Sikh community to make sure the Guru Granth Sahib was treated with respect.
“If the issue of respect to Sri Guru Granth Sahib Ji is not adhered to, then Sikhs will have no option but to continue to raise their voice and deal with the problem in a positive manner”, he said.
“The responsibility to ensure respect for Sri Guru Granth Sahib Ji must lie therefore foremost with the Sikh community. In a similar manner to other organized religions, Sikhs need to establish a centrally administered system to ensure compliance and monitoring of Sikh practices and regulation of Sikh centers.”
In July last year a campaign group called ‘Respect for Sri Guru Granth Sahib’ congregated at a Sikh wedding in Slough in protest against the Sikh holy scriptures being placed at a wedding venue stocking meat, alcohol and cigarettes.