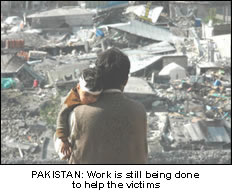 A BIRMINGHAM cricket academy is hoping to raise funds for the victims of the Pakistan earthquake when they host a cricket tournament in the city next month.
The CTEC Cricket Academy, based in south Birmingham and run by city duo Mohammed Arif and Mohammed Ishtiaq, will host the tournament 12 months on from their last charity raising initiative in which they raised over £6,500 for the same cause.
The tournament will take place at the National Indoor Arena on 17 December, and event director Mohammed Arif is hoping cricket enthusiasts will support the tournament for a good cause.
“Everyone around us helped to raise funds for the victims of the Pakistan earthquake in a way they new best and this was our offering of help through cricket”, Mr Arif told The Asian Today.
“CTEC believed that rather than putting your hand in your pocket and just giving, our event would allow people to participate in a fun event.”
He added: “This is another great opportunity for the people in the Midlands to once again show Unity in Adversity and we hope the people of the Midlands will once again dig deep to help support this appeal.”
The academy’s cricket tournament last year was put together very quickly but despite the time scale it still managed to raise over £6,500 – a figure Mr Arif is hoping to double next month.
Money raised from the tournament will be used to provide artificial limbs to children who have had arms or legs amputated as a result of the Earthquake which killed over 75,000 people and displaced over 2.5 million people.
Mr Arif added it was important the victims of the disaster are not forgotten.

”It’s still important to help raise funds for the victims of the earthquake because it wiped out many families, there was no food, shelter and in some cases loss of limbs”, he said.

”CTEC felt that it was important to give the gift of shelter and prosthetics as these are key to the rebuilding of life in the area.”
Mr Arif is also hoping to stage the event annually.
If you would like to participate in the tournament you can contact Mohammed Arif on 07968 035 466, or e-mail ctecca@blueyonder.co.uk