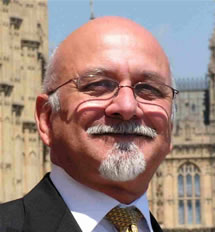 A University of Wolverhampton senior lecturer has been named in the top 20 of the country’s leading occupational health professionals.
Bashyr Aziz (pictured right) was named as a leading light in his field by influential industry magazine Occupational Health, which ranked him above the Department of Health’s Secretary of State, Patricia Hewitt.
Judges praised Bashyr’s role in making the University’s degree and postgraduate occupational health courses amongst the best in the country. They also commended the 56-year-old’s efforts to spread best practice ideas using the internet.
The School of Health’s Senior Lecturer in Public Health and Primary Care, who lives in Pelsall but hails from Tanzania, was named by the magazine as the 18th most influential person in his field.
Occupational Health magazine said: “Aziz moved into academia more than five years ago and now runs one of the most highly recommended OH courses in the country.
“He was category judge for the Personnel Today Managing Health at Work Awards in 2005, and he runs a hugely influential OH mail list, which he founded in 2003 to help improve information exchange and good practice.”
Bashyr said: “I was extremely flattered to be mentioned.
“Changes in legislation have given the University an opportunity to tap-in to some of the needs being identified, and I am incorporating these things into my teaching.”
“Dean of the School of Health, Professor Mel Chevannes, said: “We are delighted for Bashyr, it is a marvellous achievement to be placed in the top 20 in the country.
“He chairs our health and safety sub-committee and is an excellent member of staff who is fully committed to his students.”
Carol Black, the government’s national director for health and work, was named as the most influential person by OH magazine.