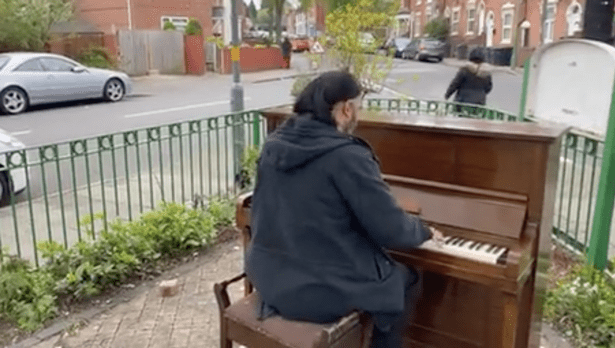 A brown piano was delivered to the corner of Church Vale in Handsworth with the of litter group Handsworth Helping Hands.

Members say the idea is to draw attention to fly-tipping in the area and across Birmingham.

He said: “In the first forty minutes, we had four people play it and several others come over for a chat. It’s a plan that has taken a year-and-a-half to come into fruition.

“The whole point is to draw attention to fly-tipping and littering, not only in Church Vale, but across the ward and rest of the city.

“We have essentially fly-tipped a piano so people notice the general litter problem. Hopefully people play it, realise they love the little social space, and then decide to look after it a bit more.

“It will be interesting to see how long it lasts. And if it does, I’ll eventually repurpose it.”

The instrument was delivered by a piano specialist. A cover will be used to shield it from rain and adverse weather.

Helpings Hands are hoping to paint it over the next few weeks. They plan to inscribe ‘#HHH’ on its base.

Shaik added: “My mate Rob Horrocks does sculptures and painting. He’s going to paint the piano and put up a sign saying: ‘community piano – please play’.”