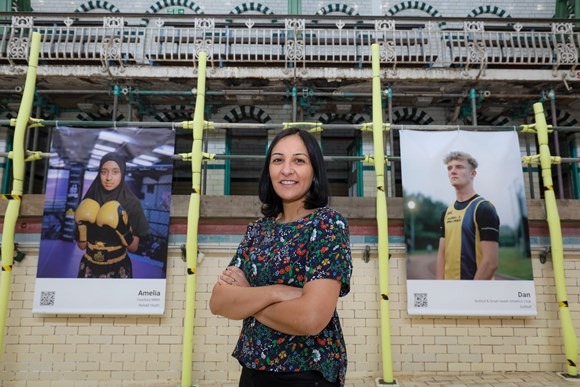 People, Place and Sport is a collection of photographic portraits and recorded conversations with individuals who take part in everyday sports across the West Midlands. From 4 April to 31 August the portraits will be on display in eight leisure centres and outdoor spaces across the West Midlands region including: Bournville Green, Birmingham Coach Station, Moseley Road Baths, St Pauls Square in the Jewellery Quarter, Haden Hill Leisure Centre, Hadley Stadium, Wednesbury Leisure Centre and West Bromwich Leisure Centre. Coinciding with the Birmingham 2022 Commonwealth Games the full exhibition will also be outdoors at Sandwell Valley Park from 4 July to 31 August.

Individuals featured in the exhibition include Amelia, a young Thai Boxer at Fearless MMA Wrestlers in Balsall Heath; Julius, first team captain at Aston Old Edwardians Rugby Football Club; and retiree Jean, a member of Bournville Bowls Club for 25 years. Accompanying their portraits are recorded conversations about what sport and the Commonwealth means to each of them.

Artist Jaskirt Boora said:“In People, Place and Sport I wanted to shine a light on the sporting hubs tucked away in our landscape, away from the large stadia, where grassroots sport takes place on a weekly basis. All the individuals I met are dedicated to their sport be it as a captain, coach or hobby. Collectively they are representative of the people of the region, and I can’t wait to share their portraits and stories.”

Raidene Carter, Executive Producer for the Birmingham 2022 Festival said:“People, Place and Sport is an exciting and timely exhibition that celebrates twenty-five fabulous individuals from everyday sporting communities right across Birmingham and Sandwell. As the region gets ready for the Commonwealth Games, we hope that Jaskirt’s portraits will bring inspiration and enjoyment to both sports and arts fans alike.”

Emma Chetcuti, Director of Multistory, said: “Jaskirt’s photographic stories are relevant and relatable and are being exhibited back in the communities where the portraits have been made to acknowledge and celebrate the everyday sporting communities across Sandwell and Birmingham.”

Jaskirt Boora is an award-winning visual artist whose work focuses on a socially engaged practice, working with local communities in the West Midlands. She is interested in celebrating untold stories while exploring visual representations of gender, ethnicity and place. Boora creates work with the aim to empower and give voice to marginalised communities. In December 2021 Boora won the BJP Portrait of Britain award for her portrait of Dr Mavi, and in September 2021 she won the RBSA 2021 Photography prize for her image of Aabidah Shah, both taken from the body of work Birmingham Lockdown Stories. Boora’s work has been exhibited nationally, including Wembley Stadium and Manchester’s People Museum, and has been widely published, including in The Sunday Times. She was also awarded the Magnum & Ideas Tap Sports Award for her work on Women’s Football and Everyday Olympian.

The Birmingham 2022 Festival is a six-month celebration of creativity which surrounds the Birmingham 2022 Commonwealth Games. People, Place and Sport is one of many sports inspired festival events that explore the intrinsic link between sport and art. It is generously funded by Arts Council England, The National Lottery Heritage Fund and the Birmingham 2022 Organising Committee.

People, Place and Sport is at multiple locations from 4 April until 31 August. For further information visit birmingham2022.com/festival