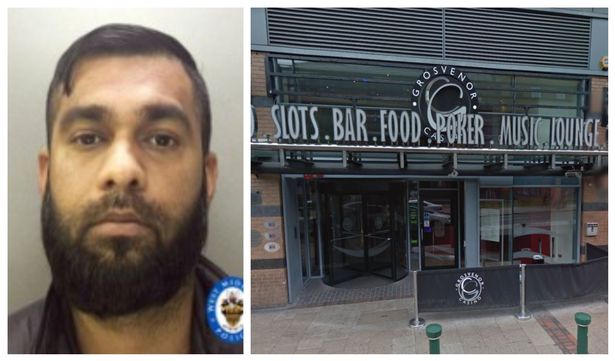 A vicious assault on a man in a wheelchair who won £10,000 at a casino was attacked by a gambler who lost all his money.

The victim won a “substantial” amount of money consisting of £9,000 in cash and a cheque for £1,000 at Grosvenor Casino in Broad Street.

Anjum Rahim, 39, of Somerville Road, Small Heath, followed the victim around the casino as he played the tables on March 30, last year.

The victim approached by Rahim, who told him he had lost all of his money and asked him for £20 so he could get home, but when he asked for a further £20 he was refused.

Rahim then grabbed the man’s jacket, pulling him from the wheelchair and they struggled on the ground, said Peter Grice, prosecuting at Birmingham Crown Court.

But the robbery bid, which was captured on CCTV, was foiled after two members of the public intervened.

The victim suffered bruising to his shoulders, back and arm.

Rahim, who had previously admitted attempted robbery, was jailed for three years and nine months

In passing sentence Judge Richard Bond said: “You saw your victim win thousands of pounds. It was obvious to you this man was vulnerable and you have followed him quite deliberately.

“You decided you were going to have it. Out of the kindness of his heart the victim gave you £20. You can see on the CCTV you used substantial violence on your victim desperately trying to get the money out of his jacket.

“You can see the man being dragged around the floor for a significant amount of time.”

Lewis Perry, defending, said: “He is truly and utterly ashamed of what he did.”

He said Rahim had been working in the restaurant business but had lost his job as a result of this. He added that he had lost a lot of money on the night.