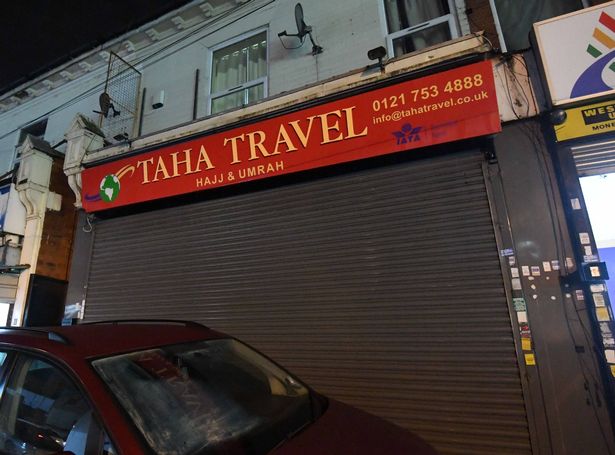 A travel agent that has now closed has left Muslim families thousands of pounds out of pocket after booking their Hajj pilgrimage trip.

As many as 20 worshippers used Taha Travel in Small Heath to book their Hajj packages for July 27 which cost around £4,300 per person.

The director of the travel agency, Jameil Kendawi, told them that their trip to Mecca, Saudi Arabia was cancelled because of issues with their visas – just one day before they were supposed to travel.

In a long text message he apologised and said he would provide a full refund in ‘less than 40 days’.

Since then the shop has closed down and former customers say they have not been refunded.

Trading standards said it is investigating the customer complaints and are not able to comment at this time.

Mohammed Asif Qureshi, 61, paid £20,500 for himself, his wife, brother and sister-in-law to go on the holy pilgrimage.

He said: “We got a text saying it was off, that was hard to take.

“When I broke the news to my wife she was in tears, she was so upset, it’s not been easy.

“I never thought this could happen, this is something that is a religious duty.

“I feel really upset when I think about this.”

Mohammed said the only reason why he booked his trip with Taha Travel was because they were the only agents that could offer him the specific dates he requested.

He said he was given a cheque for £3,200 from Taha Travel as part of his refund, but it bounced when he tried to cash it in the following day.

“I’ve been to Hajj, I’ve been to Umrah twice, I have never ever had a problem,” Mohammed said.

“Go with people who are Atol protected.

“I didn’t check because he’s a Muslim, he’s doing something good for people.”

Nasma Omer, 45, suffers from heart problems but delayed an operation so she could go to Mecca on July 27.

But she also found out her trip was cancelled the day before, via text message.

“I paid the money, my bags were ready and my family from Sudan were waiting for me there.

“I was sick for two weeks, I made everything ready.

“It really affected me and my heart is not well, it’s not been easy for me.”

She saved for more than four years and demanded her money back from Taha Travel.

She also claims she was given a cheque for £3,500 that did not clear.

Nasma said: “I do not understand how this could happen, we paid this money for Allah and this is super bad.

“I have no money to book it again.”

Another woman paid £8,000 for her and her friend to perform Hajj.

Sara Amin, 45 was swayed by how good he deal was and a friend had used Taha Travel to go to Umrah, the trip to Mecca than can be undertaken at any time of the year.

“I was so upset. I was ready. It was an awful nightmare,” she said.

“It was something that shocked me.

“It broke my heart.”

Sara had spent 10 years saving for the trip before her son helped her out with the rest of the money.

Their last contact with Kendawi was at the end of October, according to her.

She said: “I said to him, I will never forget or forgive you for this money.

“If he compensated me for the pain I felt, It would cost more than £1 million because it is not just about the money.

“It’s once in a lifetime when you go to Hajj, everything is ruined.”

He said: “It’s one of the biggest things for a Muslim, he was saving his whole life.

“He was ready for it and really heartbroken when he found out.

“It’s really sad a lot of people have been affected by this.”

Naveed Sadiq, 43, is trying to get members of the Muslim community to think twice before they book their trips.

He said: “The community stays quiet on these issues, we felt enough is enough.

“It’s a duty upon us to ask the question, are you Atol approved?

“We are looking to sort out these people out their Hajj trips and we’re going to be doing a few charity car washes to raise some money.”