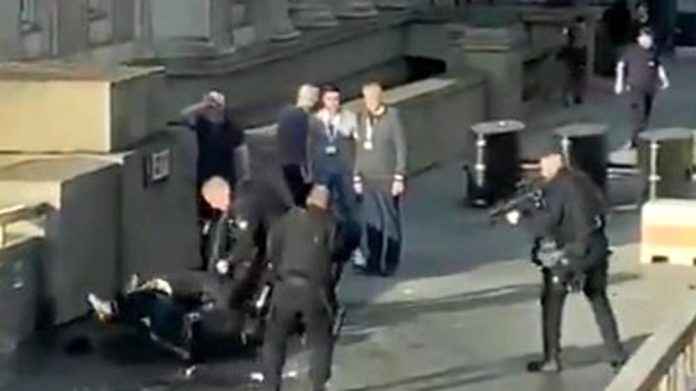 Officers responded to a stabbing incident on London Bridge and the Metropolitan Police confirmed this as a terror-related.

A male suspect was shot who died at the scene and five people have been injured.

Emergency services were called to London Bridge amid reports of shots being fired at the London tourist attraction.  Online footage has shown police shielding behind a police car on the bridge as multiple shots are fired.

The Metropolitan Police said in a statement: “I can confirm that approx 2pm today police were called to a stabbing near London Bridge.

“A male suspect was shot by specialist armed officers of the city London police and I can confirm that this suspect died at the scene.

“A number of other people received injuries during this incident and as soon as we can provide further updates on their condition, we will.

“Our heartfelt sympathies go out to everybody who has been involved in this and is anxiously awaiting information on their loved ones, we will get it to you.

“As you would expect due to the nature of the incident we responded as though this was terrorist-related.

“We are now in a position to confirm that it has been declared a terrorist incident.

“We are working jointly with the city of London police as we continue to respond.

“Officers from the Met counter-terrorism command are leading this investigation but I must stress that we retain an open mind as to any motive. It would be inappropriate to speculate further at this time.

“Due to reports that the suspect may have had an explosive device, specialist officers also attended the scene and wide cordons are in place to remain there’s no further injure to the public.

“However I can confirm at this time we believe a device that was strapped to the body of the suspect is a hoax explosive device.

“Officers continue to carry out meticulous searches in the area to ensure there is no outstanding threat to the public.

“Those extensive cordons will remain in place for a considerable time and I would ask the public please continue to avoid the area.

“Public safety is our top priority and we will be enhancing police patrols both in the city and across London.

“I would ask anyone with information, image or footage of the incident to be shared with our investigation team to do so on the police image appeal website.

“I would also ask the public to remain vigilant and report any concerns that they have to the police.