Home Local Newlywed Bride Misdiagnosed and Fighting For Her Life 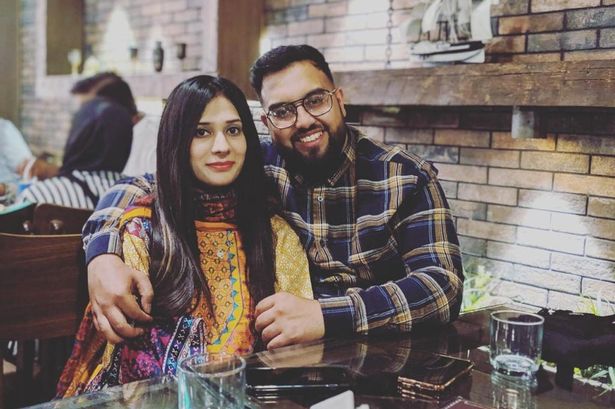 A loving husband has set up a GoFundMe page to help save his newlywed bride who is fighting for her life after doctors misdiagnosed bleeding on her brain.

Arslan Qurban from Walsall married Rida Fatima married from Pakistan in February after a whirlwind romance.

The couple applied for a visa so Rida, 24-years-old could join Arslan and start a life together in the UK.

But their dream came crashing down when Rida went to see her doctor, complaining of migraine and vomiting back in September.

She says she was told she had food poisoning and was sent away.

Less than 24 hours later, she began losing vision in her left eye, and Arslan urged her to go hospital.

She arrived at the hospital, collapsed and had a seizure and needed two emergency surgeries to stop the bleed on her brain.

Arslan is appealing for help to pay her medical bills, which are topping £5,000-a-week at the Shifa International Hospital in Islamabad.

“They told me that, if she’d left it any longer, I would have lost her,” he said.

“After the second surgery her brain was so swollen, they were unable to replace her skull.

“She was on a ventilator and was in a coma at first, but she is showing signs of improvement.

“On the day I went into see her she was slipping in and out of consciousness. She would be awake for a minute or so then fall back to sleep.

“But I sat beside her and she recognised my voice. She grabbed me by the neck and pulled me close to her. It was really emotional.

“Then she tried to open her eyes. She is showing good signs, and I know she can do it.”

Rida began suffering with a headache on September 8, and went to her GP, who prescribed migraine medication.

The following day she again visited the doctor, this time with a severe headache and vomiting.

She says she was diagnosed with food poisoning and sent home.

After her seizure in the hospital she was rushed for a CT scan which revealed she had suffered two brain bleeds.

When Arslan heard the news, her husband flew out to Pakistan to be with his wife.

“I’ve been manic and it is heartbreaking not being able to be there with her,” said Arslan, who works as a rental advisor at a car hire company near Birmingham Airport.

“I flew out to Pakistan as soon as I could. When I arrived, her face was all swollen and I could barely recognise her.

“They don’t know why it happened because she was perfectly healthy before.

“Now, she is still in intensive care, but she has been able to open her eyes, and she even attempted to write.

“She has responses on her right side, but nothing from her left yet.

“Hopefully, if things continue to improve then she will be out of intensive care in the next couple of weeks and will be moved onto a normal ward.

“Then it will be a lot of intense physiotherapy. But at this stage we just don’t know how injured her brain is.

“We have to wait for the swelling to go down.” 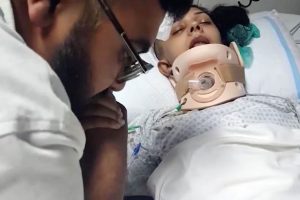 Rida and Arslan met a year ago via a Muslim dating app.

“She has responses on her right side, but nothing from her left yet.

“Ever since that first day we spoke, our love just grew and grew.

“I asked her to be my wife in a matter of a few months.

“Rida said yes straight away and finally my whole life made sense. Everything in my life had led me to the day I married her.

“It’s now been three weeks since I heard her voice and I pray I will hear it again soon.

“I know I can get my wife back, I just need to fight for it.”

Arslan has appealed for help to pay for Rida’s medical bills and said his parents were considering remortgaging their house to help.

He has set up a GoFundMe page to help pay for a treatment, which has already generated more than £17,000 in generous donations.

“We know she is in the best hands that she can be right now, as she is in a specialist hospital,” said Arslan.

“But the bills are expensive. As her husband, I need to do everything I can to try and help her and get her the best treatment.

“That is why I set up the GoFundMe page. I know in my heart that my wife has the courage to make a recovery, even though we have a long road ahead.

“Any help anyone can give to help get my wife back would mean so much to me.

“I need your help to save my wife’s life – she is everything to me.”

To donate to Rida’s care, https://www.gofundme.com/f/mx8en4-saving-my-wifes-life