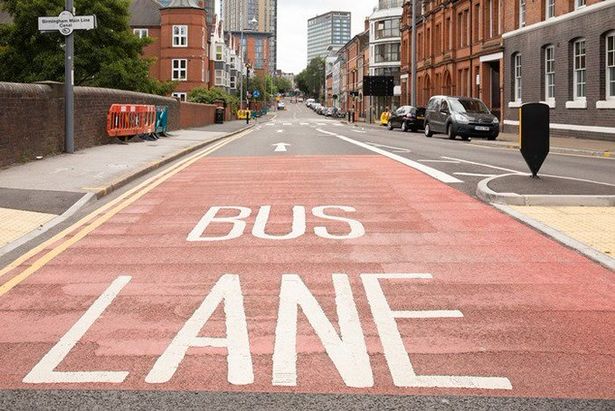 Birmingham City Council will be toughening up on the bus lane fines and sings will be made clearer.

If motorists try to get to Broad Street from here they will be greeted with the giant words Bus Lane painted in white lettering on to a bright red road surface.

The alternative recommended route is to use the A4540 Ladywood Middleway ring road.

‘We are committed to improving public transport in Birmingham, reducing the number of cars on our roads and making the citys air cleaner.’

A bus lane enforcement leaflet can be downloaded online.

It says: ‘Bus lane enforcement is part of the Birmingham Connected vision to reinvent the way people and goods move across the city.

‘Parking is not allowed in a bus lane during hours of operation, even with a blue (disabled) badge.’

‘The words ‘bus lane’ are painted on the ground and their boundaries are clearly marked with a solid white line.

‘Signs ahead of a bus lane show the types of vehicle allowed in the lane and the times when it is in operation.

‘If no times are given, the bus lane is operational 24 hours a day.’

The website adds: ‘Broken white lines… signify an area where it is permitted for vehicles to cross the bus lane, for example, if you need to turn left.

‘A bus only street is just that. It is a street which only buses are permitted to use. Bus only streets are clearly marked at the entrance to the street; signs show permitted vehicles and times of operation, if applicable.

‘Birmingham also has a number of bus gates. A bus gate gives buses priority at a junction with traffic signals by holding other vehicles at a red light and allowing the bus to get ahead of queued traffic.’

The city council’s bus lanes enforcement leaflet says: ‘All bus lanes in Birmingham can be enforced – which means you will be fined if you use one when not authorised and if a camera records your registration plate.

‘These include fixed cameras and a camera car.

‘The locations of fixed cameras can be found at www.birmingham.gov.uk/ buslanes.

‘Not all cameras will be switched on at any one time.

‘As you approach a camera site, a sign will warn you of this.

‘If an unauthorised vehicle is caught driving in a bus lane or bus only road, a Penalty Charge Notice (PCN) will be sent to the registered keeper of the vehicle.

‘The police can also fine drivers of vehicles using a bus lane or bus only road illegally. If you are fined by the police, the amount may be different to a PCN issued by the council.’