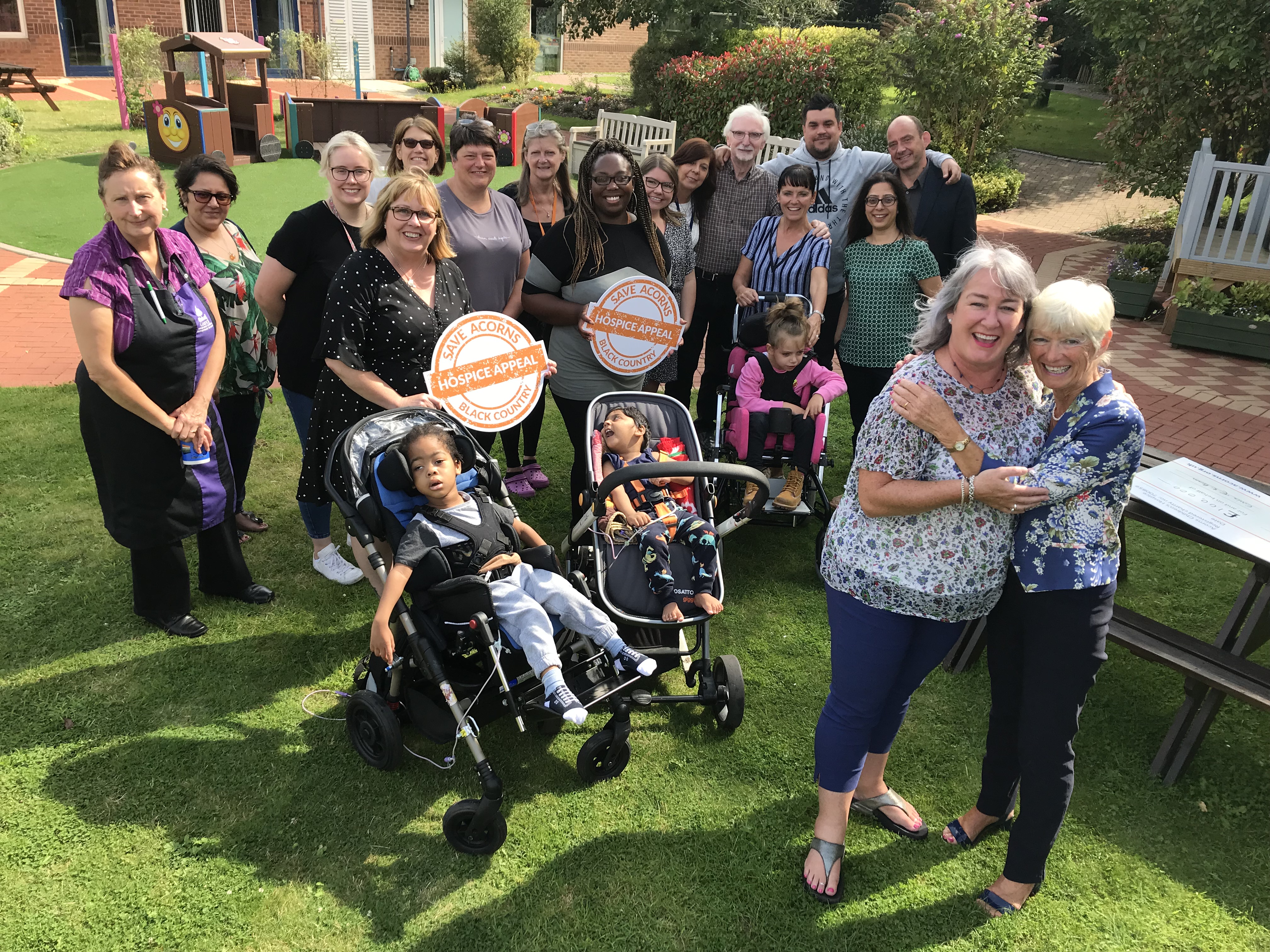 A staggering £100k donation from a former member of staff has given a huge boost to an urgent fundraising appeal launched by Acorns Children’s Hospice.

Erica Brown, who left the charity in 2009 – donated the significant amount to the Save Acorns Black Country Hospice Appeal, which aims to raise £2 million to save Acorns hospice in Walsall – following an inheritance from her mother.

The generous donor, 69, who lives in Droitwich, visited the hospice (Tuesday 6 August) to officially unveil the gift to staff and volunteers.

Explaining why she chose Acorns, Erica said: “Having worked for Acorns I know the support the charity gives to children and families across the region is an absolute and utter lifeline to all of them. Whether that support is in the home, the community, or within the hospice.

“Acorns not only enables children to have a ‘good death’ at the end of their life, but is able to continue supporting families – including parents, siblings and grandparents – who are all grappling with some of the most challenging and difficult things that anybody can imagine.”

Having forged a career as a primary school teacher, Erica became a bereaved parent following the loss of twins – Jonathan and Juliet – who died of a life limiting condition in 1973.

Vowing to commit her life to working for children with life limiting and life threatening conditions, Erica moved into the children’s palliative care sector and after various roles in special needs education, joined Acorns as Head of Research in 1999.

Erica added: “Although I’ve continued to fundraise, support Acorns and work for them in various ways, I’ve never ever been able to feel that I’ve made a real difference like I can make a difference now.

“Supporting this Appeal enables me to do something that I would never have been able to do if my parents hadn’t left me a legacy. They worked hard all their lives and were very careful with their money. It’s thanks to them that I’ve been able to do this, and I know they would give me their blessing.”

Toby Porter, Acorns Chief Executive, said: “We are truly overwhelmed by Erica’s incredible generosity towards Acorns and this Appeal. This gift is a significant step in helping us secure the long term future for families across the Black Country who rely on the vital care from our Walsall hospice.

“Following her own very personal experiences, Erica has committed her life to serving children with life limiting and life threatening conditions and their families, as well as the organisations that support them. This donation reflects how much Erica understands the true impact organisations like Acorns have to those who need us.

“On behalf of all the staff, volunteers, children, young people and families at Acorns – a huge heartfelt thank you to Erica. Her legacy will be felt for many years to come through the lives of countless people across the region.”

The Save Acorns Black Country Children’s Hospice Appeal follows a commitment of significant new NHS funding from Black Country healthcare commissioners and an earlier announcement by NHS England that they would double their central funding support to the country’s children’s hospices over the next five years.

The appeal sets out to raise £2 million to towards the Walsall hospice – which the charity had proposed for closure – until the full amount of new Government funding is reached.

For more information and to donate towards the Appeal, please visit www.acorns.org.uk/appeal