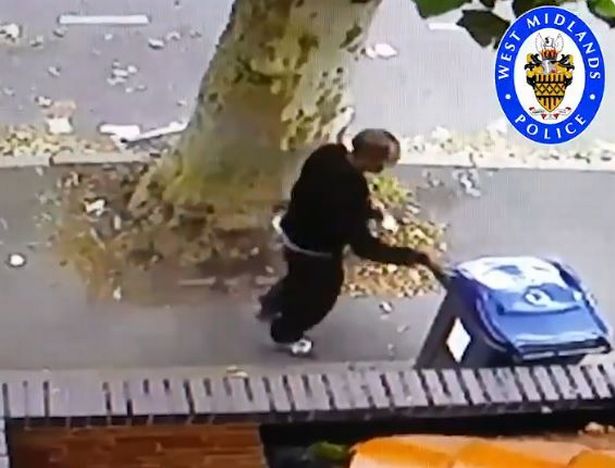 A pensioner was flung to the ground by a mugger who made a grab for her handbag and left the victim with a fractured shoulder.

CCTV footage captured from a house near the scene shows the moment the OAP walks along Stafford Road, Handsworth and is closely followed by the hooded thug.

He then lunges for the bag, pulling it from the victim’s grip and dragging her to the ground.

West Midlands Police have issued an urgent appeal to trace the thief, who is thought to have later discarded the stolen bank cards that were in the bag into a wheelie bin.

A West Midlands Police appeal reads: “Know who this man is? We need to speak to him after a robber targeted a woman aged 72 in Birmingham.

“She was walking along Stafford Road, Handsworth, when a man made a grab for her handbag just after 11am yesterday.

“She was pulled to the ground and suffered a fractured bone in her shoulder as the thief made off with cash, bank cards, house keys and a mobile phone.

“We’ve released CCTV footage of the shocking attack in an attempt to identify the man responsible.”

Sgt Dave Bebb said: “The victim was flung to the ground then left there injured.

“We are determined to catch this robber and are keen to hear from anyone who was in the area at the time, or saw him either before or after the attack.”

Anyone with information can contact police via Live Chat at west-midlands.pnn.police.uk between 8am and midnight, or call 101 anytime.