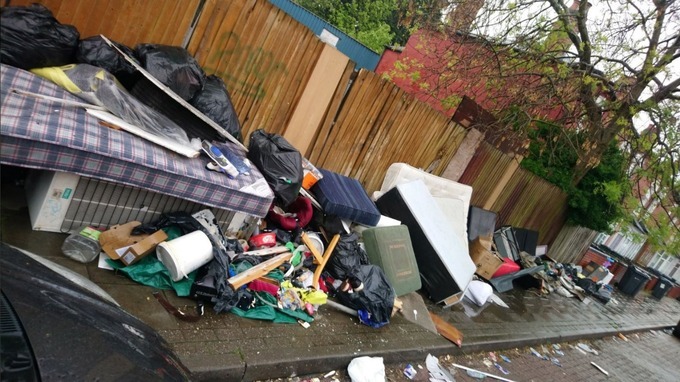 People living on Membury Road in Alum Rock claim the rubbish collected by the city council is constantly being replaced by more.

On Wednesday 8 a range of household goods and waste, such as fridges, mattresses and armchairs were beimg dumped on the pavement.

Zaheer Akbar, 37, has reported the latest pile of waste to the council.

It’s shocking. The fly-tipping is out of control. It’s been cleared on a number of occasions and people keep dumping stuff.

It had to be cleared about four times last month and it makes me really angry and frustrated because it’s me who keeps having to report it to get it cleared.

I’ve lived in the area a while and its got worse in the past five years. Maybe it’s because there are more people living in the area and renting and so on.

This lot of rubbish has just been left on the pavement, people can’t even walk past it now, they are having to walk on the road. It’s dangerous.

Some residents put it down to people who don’t want to pay to get rid of their waste.

Birmingham City Council says there is no excuse for this dumping to take place on the streets.

Whether it is one bag of rubbish, a fridge or the contents of a house clearance, any fly-tipping in this city is completely unacceptable.

The council will not tolerate this as it knows the top priority for citizens is clean streets. When cases are reported, we investigate – and when evidence is available, we prosecute.

Everyone from individual citizens to businesses of all sizes have a role to play in ensuring clean streets in Birmingham. But we know there is a small minority who do not share this aim.

Anyone with bulky waste that needs to be collected can use our paid-for bookable service as an easy and convenient way to get rid of unwanted items, use a legitimate waste removal firm or visit any of our five Household Recycling Centres.

There simply is no excuse to fly-tip.