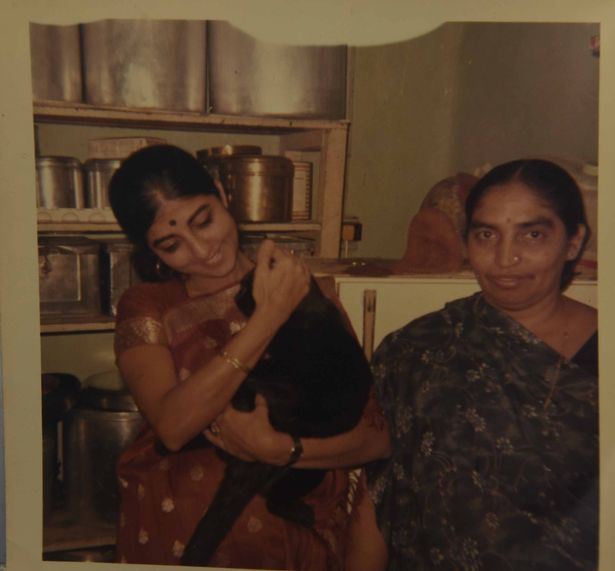 A Birmingham woman who has been named Brummie Mummies Heroes, knew she was dying from breast cancer, so decided to leave her children and husband an incredible gift – her memoir.

Kumi Modi wrote about a remarkable love story about her undying love for her husband and kids.

“The love between my mum and dad was amazing, they were best mates who loved and cried together,” said Priti, from Sheldon, who has a daughter Bailey, two.

“Mum wrote a diary when she was having chemo, we found it after her funeral.”

The memoir includes how Kumi fell in love with her ‘ray of sunshine’ husband before training as a dentist.

Sadly, Kumi died in October 2007 after a brave cancer battle and left behind a bereft family – and a diary full of her love for them all.

Kumi wrote: “Dad looked after G’ma and us all. He kept us happy.

“We had houseboys and girls to look after us – and Dad took us out on hols.

“When I finished school, I went to National College (to study science). Wanted to be a doctor – no such luck – so I was in dentistry.

“I hated smelly mouths and red teeth. Yet I did decide to have a go – which was the next best thing.

“Dad was paying my fees and working hard for all eight of us. We loved our mom and dad.”

Kumi wrote: “I stayed back to do my Masters and wrote letters to ‘Sh’ as I called Praful. My dad would hide my letters from ‘Sh’ and test me – I just wanted to go to him.

“I loved him too much and after 38 years of marriage, I still feel the same. I can’t live without my Sh, I love him forever and ever.

Kumi wrote: “Nice small wedding and we were v. happy.

“Sh family seemed wonderful. We had never met – yet I felt I was one of them.

“We flew to Kampala (Africa) and there were Mercs everywhere.

“Sh family were well to do and lovely, lovely people. Sh mum and dad and brothers/sister welcomed me and I have never looked back.

“I forgot home (India) and started my life in Kampala. What happiness and love – I was never short of anything.

Kumi met Praful in Bombay, India at a dental college.

They later moved back to his homeland of Africa to set up a dental practice in Kampala, then a second practice where Kumi worked as a surgeon.

Arriving penniless in England with their parents and siblings, they were met by Red Cross volunteers who gave them coats.

Sadly, Kumi developed breast cancer and then Praful had two heart attacks and a brain haemorrhage.

“It went on for seven years and it was horrible, I’d have to choose whether to help my mum having chemo or sit with my dad in intensive care,” said Priti, who was studying in Birmingham at the time and had to go between two hospitals to be with her parents.

“Dad was in an induced coma and couldn’t speak. He had to have burr hole surgery (a hole drilled into his head).

“We were told there was a 97 per cent chance Dad would be like a vegetable. So it was a shock when he woke up.

“Mum ended up with a radiation induced sarcoma. It was so rare she was one in five million, but she was so brave and never used to cry.”

Kumi was just 65 when she passed away.

Priti has endemetriosis and thought she’d never be able to have children.

So she was thrilled when she discovered she was going to be a mum.

But it was bittersweet as her mum was not there to guide her.

“I miss my mum and sometimes I feel overwhelmed without her,” said Priti.

Brummie Mummies Heroes is a series all about celebrating families of courage.