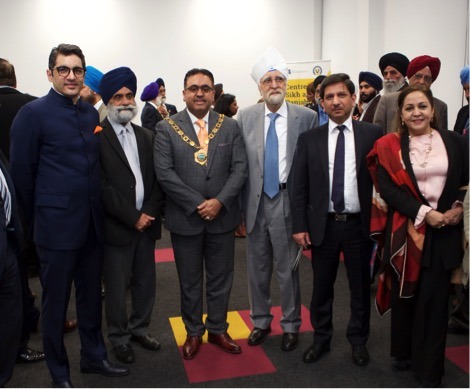 The University of Wolverhampton (UOW) hosted a special event to celebrate the 550th Birth Anniversary of Guru Nanak Dev Ji at the Chancellor’s Hall on 28th March, 2019. The event was organised by the centre for Sikh and Panjabi studies of UOW and supported by Consulate General of India, Birmingham.  More than 200 guests from across the UK came together to pay tribute to Guru Nanak Dev Ji, the revered first Sikh Guru. The event commenced with the welcoming of the guests by the Vice Chancellor of University of Wolverhampton, Prof. Geoff Layer, and featured inspirational speeches from Dr. Opinderjit Kaur Takhar, Director of Centre for Sikh and Panjabi studies, Deputy High Commissioner, Mr. Charanjeet Singh, Lord Suri, Dr. Mohinder Singh, Chairman GNNSJ, Baba Amar Singh Ji, Consul General Dr Aman Puri among others. The speeches presented at the event highlighted the various aspects of Guru Nanak Dev Ji’s life, his teachings and how he continues to be an inspiration for millions of Sikhs and people belonging to all faiths across the world. Member of European Parliament, Ms. Neena Gill, Baba Amar Singh Ji, Chairman of the Council of Gurdwara Management Committees UK Avtar Singh, Dr Sadhu Singh, Chairman of the Council of Sikh Gurdwaras, Chief executive officer of Sun Mark, Dr Rami Ranger and a number of other prominent members of the Indian diaspora shared their thoughts on Guru Nanak’s teachings and how Guru Nanak Dev Ji’s message of Compassion and Contentment is as relevant today as much as it was 550 years ago 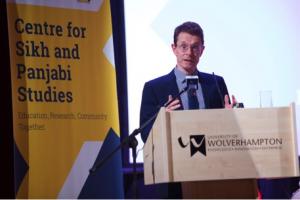 The celebrations which filled the Chancellor’s Hall at the Wulfruna Building, featured a string of speeches, motivational messages of peace, gender equality, rejecting discrimination and promoting harmony among communities. Guru Nanak Dev Ji’s philosophy has a timeless quality and universal appeal. Mayor of West Midlands Andy Street thanked the Sikhs across the Midlands region for their outstanding contribution to the community. He also appreciated the noble initiative of celebrating the Prakash Parv in Midlands. The event concluded with the ensemble of religious songs by Mr. Jas Wohra, Managing Director, East End Foods Plc, creating a spiritual environment at the Chancellor’s Hall. Communities across the globe will mark the anniversary with a series of events throughout this year, with the UK expected to host the biggest celebrations outside India.