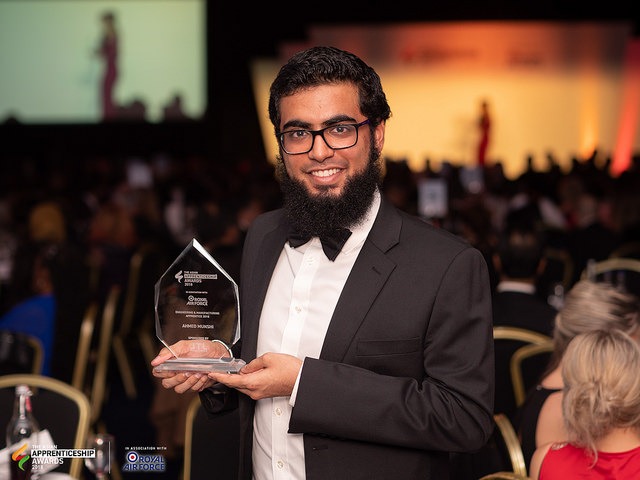 Talented young people, their employers and learning providers from across the UK gathered at Edgbaston Stadium in Birmingham, as the winners of this year’s Asian Apprenticeship Awards were announced.

From over 300 nominations, awards were presented in 8 sector categories, 2 employer categories and the overall Learning Provider of the Year and nearly 500 people attended the event. Jasmine Kundra, from this year’s BBC The Apprentice line up, was the guest speaker. A learning and development professional, she is a firm champion of developing skills and spoke passionately about the need to empower individuals to learn, grow and widen their career horizons.

Ahmed Munshi of BAE Systems was named as the Apprentice of the Year. Ahmed is based in Preston and is in the penultimate year of a Higher Apprenticeship in Project Management. The five year programme leads to an Associate Project Management qualification and degree in project management.

While his family hoped he would take the traditional route to university, Ahmed’s thorough research into Higher Apprenticeships convinced him it was the perfect combination of academic qualifications and work. Judges chose him as the overall winner because he has

become a real role model within his company and his community. This year he has successfully mentored 9 school and college students alongside his work and studies.

In his entry he wrote: “The apprenticeship has enabled me to improve my personal qualities, to be a more well-rounded individual, not simply from an occupational perspective. BAE Systems has helped me to become socially conscious, participating in activities that go beyond my day-to-day work life. I strongly believe a person should wake up in the morning with two feet on the ground and feel that they are making a difference to someone’s life.”

Head Judge Olga Bottomley commented: “There were some extremely high quality entries, and we had a very difficult decision choosing the overall Apprentice of the Year. In the end Ahmed won because he has not only embraced working life and his studies, making a substantial impact on the performance of BAE Systems, he also has an incredibly strong social responsibility ethic.

“He had to persuade his family of the wisdom of applying for an apprenticeship, and since that point he has become a fantastic ambassador for his company and apprenticeships more widely. He works closely with his local mosque and he mentors other young people. He is truly someone to watch as his career develops. Congratulations to him!”

The overall Learning Provider of the Year was named as JTL. Established in 1990, JTL is one of the largest work-based learning providers in England and Wales, working with around 3,000 businesses in the building services engineering sector. Registered as a charity, JTL supports approximately 7,700 young people in four apprenticeship disciplines – Electrical Installation/Maintenance, Plumbing and Domestic Heating, Heating and Ventilating and Engineering Maintenance.

With a reputation for setting high standards, an impressive 80% of their learners get their qualifications every year. JTL has worked tirelessly to attract more girls and people from Black, Asian and Minority Ethnic communities into the industry, work which has won them positive acknowledgement from OFSTED, recognition as Equality Champions by the former

Isa Mutlib is the Awards Project Director. He commented: “We were pleased to recognise JTL for their quality of training, and particularly for their retention rate for black and minority ethnic apprentices. At 90%, it shows the quality of ongoing guidance and support apprentices receive from JTL, and we are pleased to recognise their efforts by naming them Learning Provider of the Year.

“The Awards was a spectacular event and really celebrated the brightest and best British Asian Apprentices and the commitment of their employers and learning providers.

“We hope we have encouraged more young British Asians to consider apprenticeships, and more employers to provide opportunities to benefit from the skills that apprentices bring. We are grateful to our headline sponsor, the Royal Air Force, for their support in running the event.”

Learning Provider of The Year – JTL

Large Employer of the Year – BBC

Final judging took place in September, with over 300 applications received across the categories.